The Swans are adamant they’ll come to terms on a new contract with Lance Franklin that will keep the superstar forward in the red and the white next year.

Sydney have consistently said they are confident a deal will get done – and remain so with six games left to play in the home and away season, according to a club source familiar with the matter.

Sydney believe the nature of negotiations between club and player reflects the respect in which Franklin is held at the Swans, where he has become an iconic name since his arrival in 2014.

Despite reports suggesting Franklin could retire or even move to another club, the Swans are extremely confident an agreement will be finalised before the end of the season. The view out of the club is they want Franklin to remain, and he wants to stay. 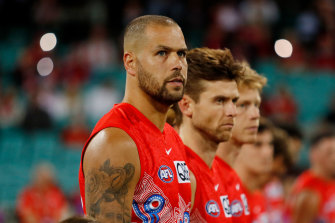 Lance Franklin is out of contract this year.Credit:Getty

Swans chairman Andrew Pridham has repeatedly said this year Franklin would be at the club in 2023.

“I’ll refer you to the last time I said it,” Pridham said when contacted about Franklin’s future on Wednesday.

Industry sources last month told The Age and the Herald that Franklin’s output would normally warrant a deal worth about $600,000-$650,000 a year, but estimated a player of his age could command about $400,000.

Officials and teammates have publicly said Franklin is heavily invested in winning a flag for the Swans, having seen him help mentor younger forwards Tom Papley, Will Hayward, Logan McDonald, and others as they come through the ranks.

Though no longer at the peak of his powers, the now 35-year-old Franklin remains a threat for the Swans. He sits equal 12th on the league’s goalkicking table with 34 and is the club’s leading goalkicker this year, along with Isaac Heeney.

Franklin remains capable of turning games off his own boot, as evidenced by his performance against Richmond when he slammed three goals in the final quarter to propel the Swans to a come-from-behind victory.

Such is the high standing Franklin is held at the Swans, the club took the extraordinary step of publicly slamming the AFL, claiming the league had tarnished his reputation for labelling his strike on Richmond’s Trent Cotchin as “cowardly”. The league made a rare apology, distancing itself from the words used by its counsel Andrew Woods.

Franklin made history in round two when he became only the sixth man in VFL/AFL history to kick 1000 goals. The moment was immediately added to the club’s heritage listings at the Swans’ Hall of Fame function this year.

Franklin is in the final season of a blockbuster nine-year deal worth $10 million.