Teenage sensation Joseph Suaalii scored a spectacular try after an AFL-like leap to help the Roosters snuff out a Magic Round rally from the Eels as Brad Fittler’s NSW selection headaches intensified.

Suaalii, 18, scored a try which will be shown on highlight reels all year when he soared through the air to pluck a Luke Keary kick out of the air, giving the Roosters breathing space in a frenetic 31-24 win after a blistering Parramatta comeback.

Having been slowly integrated into the Roosters’ NRL squad this year after off-season foot surgery, Suaalii scored a second-half double as the Eels roared back to within one point after trailing by 19 early in the second half.

And it showed why he has long been touted one of the most special teenage talents to emerge in rugby league for years after a public tug-of-war for his signature before he was even an adult.

Suaalii’s exploits were a bright spot for Trent Robinson’s side as they climbed back into the top four, but it was tempered by news Victor Radley faces a stint on the sidelines and is almost certain to be unavailable for selection in next month’s State of Origin opener.

Less than an hour after Sharks veteran Dale Finucane was concussed for the second time this season and hurt his knee in the same tackle, Radley was helped from the field with an ankle injury as the Blues’ middle forward stocks took a huge hit. 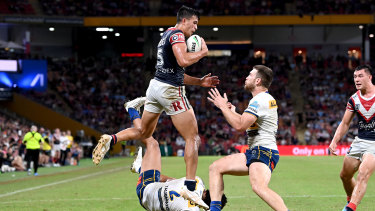 Radley, who was robbed of an Origin debut last year after his night of madness against the Broncos, was in the frame as a bench option for Fittler in 2022.

But his immediate playing future is in severe doubt after falling awkwardly in a tackle as he tried to pop an offload for NSW and Roosters captain James Tedesco. He watched the rest of the game in a moon boot on the sidelines.

The play resulted in Eels centre Tom Opacic being sin-binned for tackling Tedesco without the ball, and the Roosters made Parramatta pay with a resulting penalty goal and exquisite Sam Walker solo try while Brad Arthur’s team were down to 12 men.

Suaalii, who was granted a rare exemption to make his NRL debut before his 18th birthday last year, scored a simple try after Joseph Manu’s flick pass rolled underneath teammate Sitili Tupouniua’s hands, but it was nothing like his aerial feats shortly afterwards. 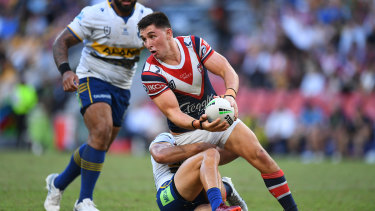 The Roosters’ Victor Radley is facing a stint on the sidelines.Credit:Getty

While the Broncos have been rejuvenated with Adam Reynolds at No.7, Sam Walker’s return to Brisbane was almost as impressive as he similarly scored a scintillating chip-and-chase try as the Eels crashed back to earth after last week’s stunning win over Penrith.

Spotting Parramatta fullback Clint Gutherson defending in the line, 19-year-old Walker kicked over the Eels co-captain and regathered before a last-minute first-half field goal padded the lead to 15 points. Walker finished the game with 15 points of his own.

Roosters enforcer Jared Waerea-Hargreaves notched his first try in almost two years when he opened the scoring after fooling opposite Reagan Campbell-Gillard, but the Eels swiftly responded when Mitchell Moses breezed through to set up Isaiah Papali’i, who finished with a double.

Tedesco pounced on a rare Gutherson error after he was bamboozled by a Walker kick, and the Tricolours further capitalised after Opacic’s indiscretion.

Moses also scored a brilliant solo try when he tiptoed down the sideline and kicked twice – the second past a scrambling Tedesco – before Ryan Matterson’s try against his old club capped a three-try Eels burst within 10 minutes.