Melbourne Storm and Parramatta Eels produced a high-quality thriller at AAMI Park in which the lead ebbed and flowed in a fast and furious clash with the visitors winning 28-24 through an extraordinary final try.

Ray Stone was the difference in the dying moments of the game when teammate Mitch Moses’ kick for a golden point came back off the post and fell to the substitute, who dived over.

It was a pulsating battle as first the Storm, then the Eels, had periods of ascendancy before Stone sealed the victory.

The Storm were missing key players Harry Grant and Tyran Wishart through COVID-19 protocols while Nick Meaney came in for Xavier Coates in a late change. 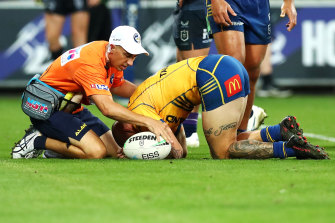 The biggest inclusion for Craig Bellamy’s side was Brandon Smith, who returned early from a broken hand to replace Grant, and he was involved early as the Storm took the game to their rivals.

Few clubs have a positive record against Melbourne, but the Eels have now beaten Storm three times in a row.

However, they appeared vulnerable early as Cameron Munster and Jarome Hughes looked to give their team an early initiative. 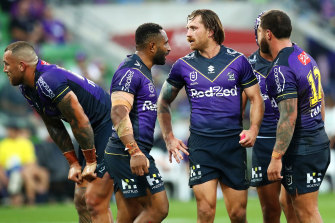 The hosts thought they had got their noses in front after five minutes when Meaney crossed after Storm took advantage of some early errors only for the try to be disallowed for obstruction.

Storm did hit the front in the 12th minute when Munster linked up with Josh King to find Smith, who showed no signs of a problem with his hand as he powered over, Ryan Papenhuyzen converting.

The Eels came back strongly and levelled just before the midway point of the first half after they cracked the Storm defence and an excellent line break by Dylan Brown produced an opportunity for Clinton Gutherson to score.

The game turned into an arm wrestle, and it was the Eels who broke the deadlock when they worked the ball along the backline before Dylan Brown fed a pass out to Waqa Blake whose power and drive carried him straight through Papenhuyzen. 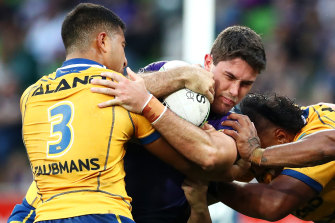 Storm’s Nick Meaney is tackled during round three at AAMI Park. Credit:Getty Images

Meaney got compensation shortly before the interval when Hughes, Munster and Kenny Bromwich combined to set up the wide man to bring his side back on terms.

The second period began at an equally frantic pace but when the ball fell to Munster in the middle of the field he showed great vision and technique to send a floating kick to the left wing, the ball bouncing perfectly for Meaney to collect in his stride and grab his second of the night.

There was no let up in the furious pace of this game, nor the intensity.

The Eels showed they were right back in it midway through the second period when Moses, given time, chipped a cross field kick forward for Tom Opacic to take and ground; Moses converting to make it 18 apiece. 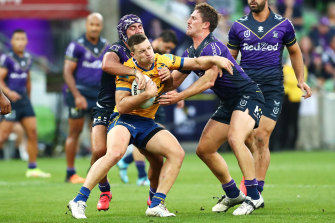 Moses was again a crucial figure with some eight minutes to go as the Eels got into a promising position, pitching another kick forwards, which found Stone, who juggled the ball before gaining control to ground and put the visitors in front.

Storm were not to be denied and when Smith made a bullocking break and fed Munster Papenhuyzen galloped in support and dived over to set up the thrilling finish.