James Sicily has declared himself an empowering leader, but also one prepared to have “challenging” conversations, as he prepares to step out for the first time as Hawthorn captain.

Sicily’s development from an overly emotional but talented defender into one of the club’s true leaders will see him be caretaker skipper for the next four rounds, beginning in the twilight clash against Melbourne at the MCG on Saturday. 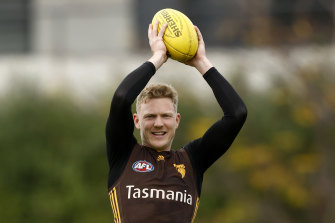 Ben McEvoy’s serious neck injury earlier this month meant vice-captain Jaeger O’Meara, 28, initially filled the top role but he and Sicily, 27, struck a plan to ensure both men had a chance to show their captaincy credentials. McEvoy turns 33 in July and may cede the role once the season is over.

“‘Jaegs’ and I collaborated and came up with what would be the best strategy moving forward with ‘Macca’ out. We conversed and thought it would be a good idea for him to captain up until round seven, being this round, and I will have a go at it until round 10. See how I go,” Sicily said on Friday.

“There is usually the mid-season review in round 10. If I do a good enough job, we’ll see how I go, I might be captain for a bit longer.”

Captaincy also brings greater responsibility off the field, whether that be dealing with club management and the board, the media and, of course, handling teammates. The latter can bring all manner of challenges, including boosting the confidence of emerging youngsters, or putting heat on more experienced teammates not performing up to expectations.

“I think I am quite empowering of my teammates, know what their strengths are, tell them that’s how they should go about their footy. I think I’ve got strong relationships within the club, which allows me to have some good conversations,” Sicily said.

“Whether that be a challenging conversation, or one to just give someone a cuddle and encourage them to tell them to keep going.”

That Sicily will also celebrate his 100th match on Saturday ensures this clash will live long in the memory.

“Obviously proud to get to 100 games. I would have liked to get there a little quicker but (I faced some setbacks) through injury and what not. I’m equally excited to be captain for the first time. I think I am going to enjoy the challenge that comes with that,” he said.

The challenge on Saturday for the 3-3 Hawks will be to avoid a repeat of the stinging last-term fade-out they experienced against Sydney in a 41-point loss on Anzac Day. The Hawks conceded nine goals, booting only one themselves, nullifying the strong start they made. 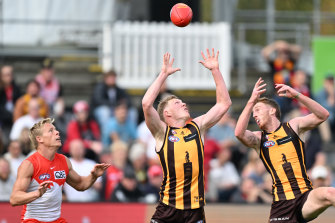 Sicily and the Hawks suffered a final-quarter fade-out against the Swans.Credit:Getty Images

“Last week’s performance was good to the last quarter. That’s what is going to happen to a younger side, really (needing to) stick with it, the way we want to play for four quarters,” Sicily said.

The dynamic backman said Melbourne, the defending champions and enjoying an unbeaten start to the season, were the “benchmark” of the competition but acknowledged the two teams had drawn when they met under lights in round 18 at the MCG last season. Luke Breust evened the scores with a goal in the final minute, the Hawks having trailed by 27 points in the second term at an empty MCG closed because of Melbourne’s lockdown.

“I am sure we can take some confidence out of that, that we can match it with them because we have done it in the past,” Sicily said.