‘She wants him to stay’: Cotchin likely to play despite sick child in Melbourne

Richmond coach Damien Hardwick expects his captain Trent Cotchin to play in Saturday’s crucial Dreamtime match against Essendon, despite conjecture he may return to Melbourne to be with his sick daughter.

The Tigers said on Wednesday the decision was fully Cotchin’s to make, while on Thursday Hardwick said his skipper was “hurting” but at this stage would fly with the team from Sydney to Perth to play in the sold out match. 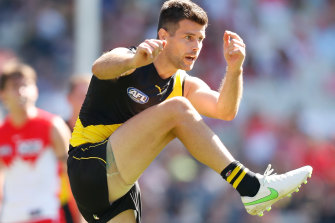 Trent Cotchin is likely to play on Saturday, despite his daughter being sick back in Melbourne.Credit:Getty Images

“Brooke [Cotchin’s wife] is adamant that she wants him to stay and Trent will make that decision if the condition [of his daughter] changes. But from our point of view he will be on the plane come tomorrow,” Hardwick said.

“Knowing Trent as well as I do, he’d be hurting inside, there’s no doubt. No one likes to have a sick child, especially when you feel so far away from home.

“Trent is very, very good at making sure everyone around him is OK. He is such a selfless person and it’s what makes him a great captain … he is doing it a little bit tough at the moment but he’s continuing to lead the club as we always knew he would.

“We expect that to continue until something changes.”

The Tigers will be boosted in Perth by the arrival of former St Kilda and South Fremantle player Matthew Parker, who Richmond selected in Wednesday’s mid-season draft.

He will join the Tigers squad in Perth on Friday but Hardwick gave no indication of how close Parker was to being able to play at AFL level. He has been playing in the WAFL this season.

“Matt fits the bill. He is dynamic, he is quick, he can run and he wins the ball so we are really excited to welcome him to the fold,” he said.

“It’s amazing, you learn a lot of lessons in life, he got an opportunity at St Kilda, it didn’t quite work out for him. Went back, worked on his craft at South Fremantle and he gets a second opportunity.”

Richmond will be without their triple-premiership ruckman Toby Nankervis, who injured his knee last week. They will get back Shane Edwards from injury.

Hardwick is open to allowing the already selected Mabior Chol and Callum Coleman-Jones to fill the Nankervis void, but also raised another name who could debut.

“We have got a couple of options, it is whether we go smaller in the ruck. We are really excited by a young tall we have got in Samson Ryan [who] will maybe get an opportunity as well.

“We will work our way through that, have a look at what it looks like at training and go from there. We think we have got a number of options.”

The 206-centimetre Ryan was drafted with pick No.40 in the 2020 national draft from the Brisbane Lions academy.

With Tom Lynch out and now Nankervis, it is a great opprtunity for the likes of Chol, Coleman-Jones and potentially Ryan to shine.

“We are very lucky to have depth of quality key forwards. We’d like to get that to try and work a little bit better moving forward and play possibly the three talls with the ruck. We are getting a really good opportunity to look at how that works now,” Hardwick said.