Souths players, including returning superstar Latrell Mitchell, belted each other with a game-like intensity at Redfern Oval in a bid to avoid a Dubbo drubbing against competition leaders Penrith.

Coach Wayne Bennett has been far from impressed with the defensive efforts of his side who conceded 20 or more points in each of their last four games while Mitchell was suspended. 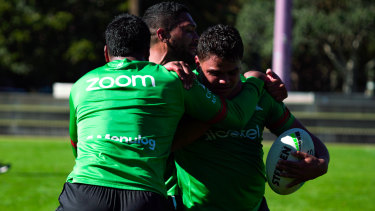 Latrell Mitchell slogs it out during a brutal South Sydney field session on Tuesday.Credit:South Sydney Rabbitohs

Hooker Damien Cook added: “I think the coach was getting into us today. We’ve been a bit off lately with our defence. After the first round, we went about five or six weeks where we defended really well. We were only leaking 10 to 12 points a game.

“We’re just trying to get our defensive mindset back. And it needs to be done against these guys as well.

“The first contact is always important. If you don’t go in with any intent, players are always going to be able to get good offloads and second phase. And I think Penrith play second phase better than anyone at the moment.” 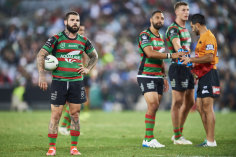 Souths have conceded more than 20 points in each of their last four games.Credit:Getty

For all of Mitchell’s barnstorming runs, especially when linking with five-eighth Cody Walker, his organising of the defensive line will be a huge boost for the Panthers game.

Arrow likes to refer to Mitchell as “grub” and jokingly said his teammate had basically enjoyed a “four-week holiday”.

“But like Wayne has said before, Latrell is a winner – he trains to win and plays to win, and to have him back in the side it’s only going to help us,” Arrow said.

Cook said Mitchell had continued to be a vital member of the team during his suspension, and Bennetter even took him to Canberra and Brisbane for games so he was not tempted to travel back to his farm in Taree.

Josh Mansour (hamstring) is also back for Souths for the clash against the club who told him he was not wanted two days after last year’s Grand Final loss.

In other team news, the Dragons’ suspension and injury problems mean Cody Ramsey shifts to fullback, Jordan Pereira returns to the wing after a suspension and prop Jaiyden Hunt will make his debut off the bench against the Sharks on Friday night.

Albert Kelly will make his Broncos’ debut in the halves against the Sydney Roosters, Jakob Arthur retains the Parramatta No 6 jersey after his emotional debut at Magic Round, while Canterbury and Canberra will hand debuts to 19-year-old centre Aaron Schoupp and halfback Brad Schneider respectively.