Proof is in the premiership: Why Leon Cameron is vulnerable

Damien Hardwick hasn’t suddenly become a poor coach because his Tigers missed finals in 2021, lost a few games this year and are up against it to add a fourth flag this season.

Richmond have become a lesser team than their peak because their stars are no longer at their peaks (or in Dustin Martin’s case, not there at all for the time being). But that is the natural evolution of a team. That is, we accept Hardwick is a good coach because we have tangible proof in the form of three silver cups, though his players have aged and the list is in transition. 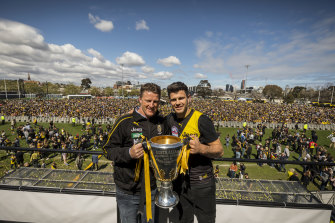 Ditto Alastair Clarkson. He was a verifiably good coach, but his team evolved and dropped away.

Are we prepared to reach similar conclusions in the cases of Leon Cameron and Ken Hinkley? Without flags to their names, we have nothing to hang on to other than time in the job and finals performances. We can’t say they can do it because they didn’t – win a flag, that is.

The AFL has a culture, less common in world sport, that does not value the success of ladder placements or grand final appearances. The only currency is flags. Whether it should be enough (have North Melbourne gone better without Brad Scott?) is an irrelevant question because of the AFL reality.

Cameron, a realist, admitted after another loss that the next month will inform how his team will go this year and thus any decision on his retention as coach. 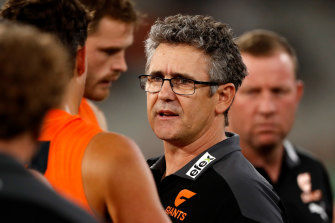 Coach Leon Cameron is under pressure at GWS.Credit:AFL Photos

Port Adelaide’s second half against Carlton on Sunday will mitigate the pressure Hinkley would have been under had the game continued to spiral the way it did in the first half. A coach who can adjust his team and tactics and draw fight out of his team to rally when away from home and down heavily against a team surging after its own chastening loss last week must be worth something.

Hardwick is – rightly – not confronting any questions because he has three flags and the certainty of his standing in the game and at his club as his team endures a period of vulnerability. In contrast to other coaches, someone such as Hardwick is a comfort to their club as they seek the next iteration of their team. What Hardwick’s presence says to Richmond is the coaching is one area they don’t need to worry about as they evolve the list.

Cameron may not be given the time to find his team’s next iteration. And yet this is very different team to the one that lost the 2019 grand final to Richmond – as different as Richmond’s is. There is no Jeremy Cameron, Zac Williams, Aiden Corr, Shane Mumford, Heath Shaw and, despairingly, for the first five games this year, Toby Greene.

This is as much a regenerating team as Richmond’s, but they are doing so after never having won anything in their last crack at it. Coaches who fall short seldom get the chance to replenish and go again. If Collingwood had won in 2018 it is likely Nathan Buckley would still be coach. Would Adam Simpson not be under more pressure now if West Coast had not beaten Buckley’s team? 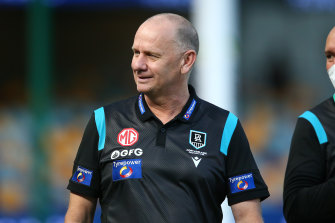 Ken Hinkley’s Port Adelaide were much improved in the second half against Carlton.Credit:AFL Photos

Essentially, it is about having the players. No one wins a flag with a good coach and a poor team Good coaches cannot make poor teams, poor players, into good ones. But bad coaches can make good teams unto underperforming ones.

Melbourne were confronting that with Simon Goodwin. They felt they had a good list of players, but there were some who harboured doubts about whether they had the right chemistry, the right coaches to harness it. The review, which Gary Pert and Alan Richardson led, shifted that discussion. They reinforced that they had the right person in charge and after tweaking a few things they have found the right coaching formula to tease out the best in the players.

Carlton under Michael Voss have echoes of Melbourne after their review. The Blues were sure they had a more talented list than the performances they were getting. A couple of canny recruits, a change of coaching system, a fit-again captain and the return of Charlie Curnow and the results are showing. Not to say it is complete, but a bounce has been obvious.

A difference for Leon Cameron is that there was pressure on him in the seasons before the Giants made the grand final. There were some inside the club who were coach sceptics and restless for change before he then went on to take them to a grand final and if not silenced, at least mollified those sceptics. For a time.

That grand final appearance and regular finals might not be enough to see Cameron retained at year’s end if the losses continue, but this week is not the time to harshly critique him. The Giants played well for a half against the Demons then they were subject to the sort of football that will overwhelm any team in the competition. The Demons’ third quarter was redolent of their unstoppable grand final surge.

What is of greater concern has been the under-par performances of senior players Tim Taranto, Josh Kelly, Lachie Whitfield and Nick Haynes. It is Harry Himmelberg struggling to be the main target to carry a forward line. None have been terrible, but they have not played to the level they should. Is that down to coaching and the style of game?