‘Price we had to pay’: Struggling Magpies ramp up focus on skills

Collingwood coach Nathan Buckley has revealed the Magpies have added a skills-focused training session to their weekly agenda in a bid to rid the side of mistakes which have plagued a campaign gone wrong.

The Magpies head into Saturday’s clash against Geelong at the MCG in 16th position with only two wins, their season derailed not only by last year’s trade-period firesale but also too many basic skill errors through the opening 10 weeks of the season. 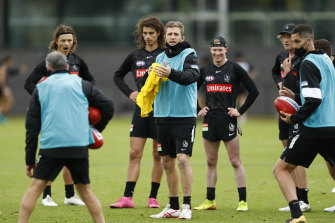 Collingwood are focusing on skills with extra sessions at training.Credit:Getty Images

Those errors continued in a one-point loss to Port Adelaide when, despite leading for more than 91 minutes and having a 75 per cent disposal efficiency, errors at key times meant they managed only eight goals.

Buckley said on Friday that “ball handling at ground level and sticking tackles” had been season-long issues, and an extra skills-focused session was “a price we needed to pay”.

“We decided to change up our schedule about a month ago. We have put an extra session into our week. It probably gives us an extra 45 to 60 minutes of ball handling and skills work and we believe that is starting to come through now,” he said.

“There is a price to pay for that because you might be putting a little bit extra load into your players but I think that’s the price we needed to pay in the short term to get that work in.

“There are things that we have amended and looked to do. There is no doubt if you take last week as a one-week sample, we probably created opportunities to kick 14 or 15 goals but kicked eight. A lot of that was due to simple basics that weren’t executed at the time or didn’t come off.”

Buckley said the Pies’ endeavour had been good, and that will need to be razor-sharp if they are to topple the surging Cats. This contest will be held without supporters because of Melbourne’s latest lockdown, costing the Magpies $1 million in lost revenue.

But Buckley said his side was more than capable of handling this latest distraction in a season when the club has been under a fierce spotlight.

“The other reality we need to consider is that we have had a fair bit of external, off-field concerns that have been in place … and we have had to handle and been able to focus on our on-field endeavours and we feel we have a group that can do that really well,” he said.

The Magpies have made three changes, including losing Taylor Adams, the vice-captain having just returned to the side for the first time since round four after a knee injury. He has knee soreness but the Magpies insist it is not serious.

“He had a player fall across his knee in a very similar action to what he injured six weeks earlier. He did very well to get through the game with that,” Buckley said.

“Subsequently, he was unable to get up this week. We know it is not anywhere near the severity of the initial incident.”

The Magpies will blood a seventh debutant, with former Oakleigh Chargers captain Trent Bianco – a creative playmaker with good skills on either side of his body – earning a call-up. A Magpies supporter growing up, Bianco has averaged 26 disposals and 7.5 tackles per game in the VFL.

However, veteran Levi Greenwood is still dealing with concussion symptoms and remains on non-contact duties with no clear return date.