The medical care afforded to AFLW players needs to be the same as their male counterparts, according to a prominent AFLW player manager, as the news that the Australian Sports Brain Bank had discovered neurological damage to the brain of the late Giants’ player Jacinda Barclay reverberated around the competition.

Player manager Alex Saundry told The Age and The Sydney Morning Herald that the current soft cap for clubs in the AFLW had to be addressed before next season, with many concerned about the level of medical expertise they can access for women’s programs if the cap remains at $450,000 per club per season. 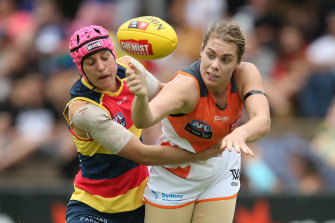 Saundry’s comments come after Australia Sports Brain Bank researchers discovered neurological damage in the brain of Barclay, who died last year aged 29, with several sources across the industry supporting Saundry’s view for greater medical support in the AFLW, which will enter its sixth year in 2022.

Saundry praised Barclay and her family for donating her brain for research with The Guardian reporting on Friday that the post-mortem examination showed Barclay’s cerebral white matter had thickened and hardened. Chronic traumatic encephalopathy (CTE) was not found, as it had been in former AFL/VFL players Shane Tuck, Danny Frawley and Graham Farmer.

The Australian Sports Brain Bank executive director Michael Buckland, who reported the Barclay findings, told The Guardian that Barclay was a trailblazer as very few women had come through their studies to this point.

Professor Alan Pearce, a neuroscientist, said researchers would like to examine the impact of head knocks on women more, however, men were more likely to attend his clinic and be involved in research.

“While we call [for] an equal split in genders [to participate in research] it just seems to gravitate towards a majority of male participants. It is not because of choice. It’s just the way it plays out,” Pearce said.

“We just need to encourage more females to come forward.”

Barclay, an outstanding multi-sport athlete who also played baseball and American football, battled mental health issues before her death which rocked football and the Giants. Barclay’s mother Deb made an emotional presentation of an award in Barclay’s honour at Thursday night’s club best-and-fairest awards.

Saundry said the league’s concussion protocols which require players to be sidelined for a minimum of 12 days if concussed were a good start with Crows captain Chelsea Randall showing great leadership in the message she conveyed when she was automatically ruled out of the AFLW grand final after being concussed in the AFLW preliminary final.

The AFL announced this week that they had appointed two executives, Associate Professor Catherine Willmott and Rachel Elliott, to run their concussion strategy and will invest $1 million into concussion research in 2021. They have also encouraged people to pledge their brains for research, with Carlton great Ken Hunter one who has made the decision to do so.

The league is currently visiting clubs for discussions around the football department soft cap for men. The cap was drastically reduced from $9.7 million to $6.2 million when COVID-19 restrictions destroyed revenue projections.