Melbourne fullback Ryan Papenhuyzen has today flown out to the United States for a two-week training camp with the reconditioning guru who helped Latrell Mitchell last year.

Papenhuyzen is on his way to Philadelphia to link up with the highly regarded Bill Knowles, who will also work with injured Manly superstar Tom Trbojevic later this month. 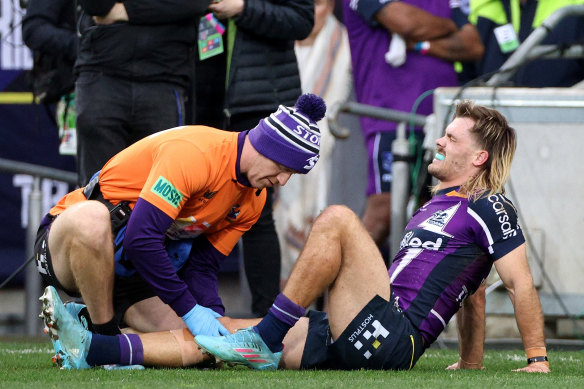 Papenhuyzen suffered a horrific injury in July last year, shattering his knee cap in a match against the Canberra Raiders at AAMI Park.

Papenhuyzen still isn’t running and appears unlikely, barring a Knowles miracle, to feature for the Storm in round one.

“I’m six months in now and I’m not running yet,” Papenhuyzen said before boarding his flight.

“I’d probably want a good run on my legs before I’m ready for round one. Who knows? I could come back from this trip and be ready to go. It’s a bit hard to tell. I went into it knowing it’s not an easy injury to get over. I didn’t really have a timelines so whether it’s a setback or it’s taking longer than I initially had in my head … I’m not too sure. 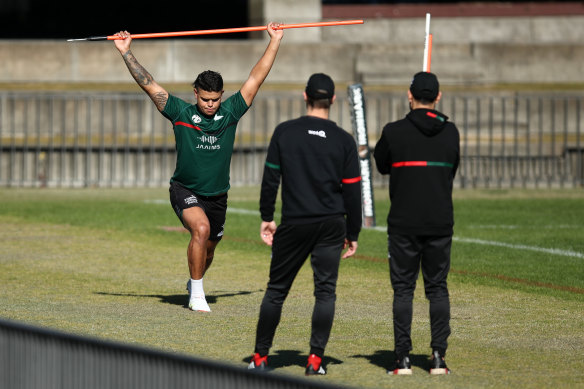 Latrell Mitchell has worked overtime on fixing his hamstring woes.Credit:Getty

“I’m not able to do a lot of gym activities yet. I still can’t squat or anything like that. I’m just trying to find what’s comfortable for me, but I’m still not running so that’s an indication of where I’m at. This is an opportunity to progress with my rehab and get some different eyes to see if I’m going in the right direction or if there’s other things I can do to be back ready playing next year.”

Knowles is world-renowned sports reconditioning and athletic development guru, with over 33 years of experience.

He has worked with some of the biggest names in world sport, including Tiger Woods, Alex Rodriguez, Andy Murray, Peyton Manning, Carson Wentz, Dara Torres, Jonny Wilkinson and Frank Lampard.

He helped Latrell Mitchell to overcome a series of troublesome hamstring injuries. For Papenhuyzen, he’s been taking inspiration from Sydney Roosters, NSW and Australian captain James Tedesco, who once suffered a similar injury while playing for the Wests Tigers. 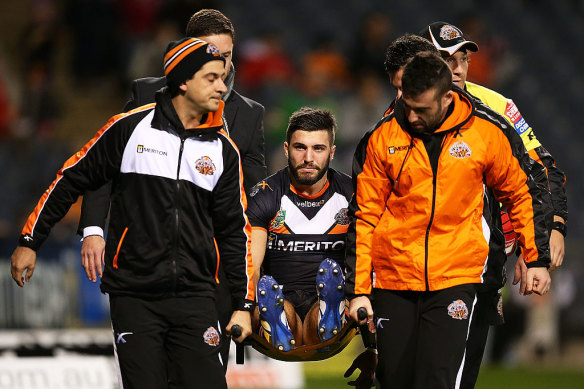 Tedesco suffered a similar injury to Papenhuyzen while playing for the Tigers back in 2014.Credit:Getty

“For me I don’t want to go into it with any expectations. I just want to go in and do my best and see how I come out of it. It’s a pretty cliche answer but I feel if you go in with expectations you’re either going to be let down or really happy.”

“I’m going there to learn new things. I know it’s going to be tough. The result of that we’ll see in a few months.” Storm sponsor Grill’d are paying for the trip to the US.