North Melbourne have parted ways with coach David Noble after less than two seasons in the job, a club source confirmed.

His departure comes after the club commissioned experienced football administrator Geoff Walsh to undertake an external review of the football department. 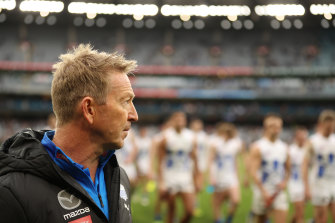 David Noble is no longer coach of North Melbourne.Credit:Getty Images

North have just one win from the season and are on the bottom of the ladder despite a more competitive performance against Collingwood at the weekend.

Following that seven-point loss, Noble said he had faith in the players and in his own ability to succeed, but the result did not buy him more time.

North have won just five of the 38 games Noble has coached.