Latrell Mitchell will have one chance to prove he is ready for a State of Origin recall, with South Sydney set to rest him for this week’s clash with the Gold Coast Titans.

Mitchell touched back down in Australia on Thursday morning after a 16-day trip to the US to help repair the tendon tear in his left hamstring that has ruled him out of the Blues’ series opener on Wednesday night.

The Souths fullback was hoping to get two games under his belt before Fittler names his team for game two, but the club is leaning towards erring on the side of caution.

He is more likely to play his first game back in the NRL the following week against St George Illawarra in Wollongong, on a Thursday night just three days out from the naming of the Blues team for game two in Perth.

Fittler, speaking on Nine’s Sunday Footy Show, was unaware that Mitchell was back in the country and invited him to join the Blues in camp in the lead-up to game one at Accor Stadium.

“I haven’t spoken to Latrell. I spoke to him beforehand and we had a yarn about what was going on and his intentions by going overseas,” Fittler said. 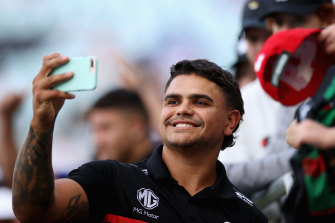 Latrell Mitchell is expected to return against the Dragons in round 15.Credit:Getty Images

“By all accounts, it went really well. I didn’t know he was back in Australia at the moment and if he is I’d love him to come into camp and say hello.

“He did an awesome job last year. I know he’s got unfinished business with the NSW Blues.

“I know he uses this as a platform to show what he’s about, show how good he is. He’s a mentor to so many people these days. For a young fella, he’s taken on such a role of responsibility. I feel like this is the stage where he needs to do it. I’m glad he’s back. I hope he’s well. It will be great to see him.” 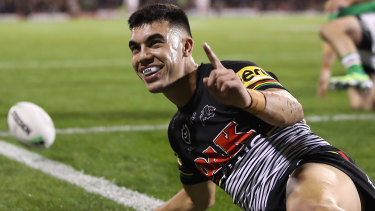 Charlie Staines could be on the move next year.Credit:Getty

Staines on the move?

There have been conversations between Penrith and Charlie Staines’ manager about the future of the young flyer.

Staines, who played fullback his entire junior career, has dropped down the pecking order as a winger at the Panthers.

He was overlooked for last year’s grand final and has now been leapfrogged by rookie Taylan May, who this week signed a new two-year deal with the club.

When the club signed May on a three-year deal, they did so thinking he would eventually steal the No.1 jersey from Dylan Edwards. However, the Panthers fullback is arguably the most improved player in the competition and now has a mortgage on the position.

The Panthers know they need Staines this year, even if it is as a depth player, to assist with their quest for back-to-back titles.

But there is a mutual understanding between the club and his manager for next season that if he was to land a deal at another club to play regular first grade, Penrith will not stand in his way. He is on more than $350,000 next year.

Interestingly, the Bulldogs are looking for a No.1, with Matt Dufty likely bound for the Super League. Canterbury went after Staines 18 months ago and missed out on his services.

He remains best friends with Bulldogs five-eighth Matt Burton, who is a free agent on November 1 and can then negotiate with rival clubs for the 2024 season.

The Wests Tigers have opened negotiations with Daine Laurie about an extension after meeting with his manager on Monday. Laurie is on a bargain-basement deal with the club for less than $200,000 this year. 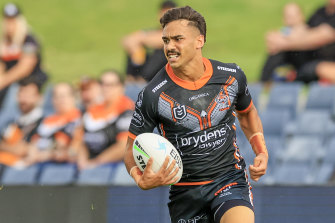 Daine Laurie is in the frame for a contract extension with the Tigers.Credit:Getty Images

That increases to about $350,000 next year for the final season of his three-year deal with the club. The Tigers are willing to upgrade and extend his deal.

How much he could earn will depend on how well he finishes the season.

Storm looking to bring the Payne?

There are some at the Brisbane Broncos who feel like the Melbourne Storm are setting themselves up to steal Payne Haas away from them. 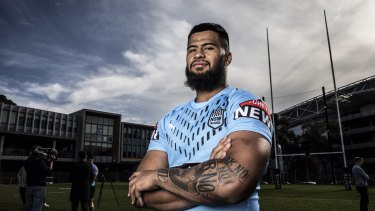 NSW and Brisbane enforcer Payne Haas has had plenty on his plate of late.Credit:Jessica Hromas

The Storm are losing several big-name forwards at the end of the year, with Jesse Bromwich, Kenny Bromwich and Felise Kaufusi heading to play under Wayne Bennett at the Dolphins next year.

The versatile Brandon Smith is also departing Melbourne at season’s end, bound for the Sydney Roosters. The Broncos could do worse than ask for Cameron Munster in any potential release deal involving Haas.

Billy Slater has admitted the NRL sometimes “need to protect players from themselves” with both the Blues and Maroons offered extra education on how the independent doctor will be used for the first time in State of Origin on Wednesday.

The Queensland coach has lent his heavyweight support to the introduction of the remote brain injury surveillance system, which will be used to monitor potential brain injuries in rugby league’s most brutal arena.

Recent series have been blighted by both states privately questioning whether rival players should have been removed from the game for concussion assessments.

“To be fair, I’m fully supportive of that part of the game,” Slater said of the independent doctor. “We play a brutal sport. It’s a combat sport and that’s why it makes it so great. I’ve been a player in recent times and I understand how important your life is. We need sometimes to protect our players from that. I think the doctors and the game have been tinkering with the independent doctor, and they’ve been getting it more right than they had when it first came in. I think it’s starting to find a common ground.”

NRL head of football Graham Annesley said the topic of the independent doctor had been part of regular weekly discussions with both states in the lead-up to this series and each had been advised they could have a separate seminar to discuss the issue.