A Hail Mary deal with the Roosters might be the last chance Matt Lodge has to prove he is anything but an average middle forward who has enjoyed more hype than heroics when it comes to delivering on the football field.

After being released by the Warriors a few weeks ago after having second thoughts about relocating to New Zealand, Lodge has been puddling about the Brisbane rugby union scene to stay fit as his management tried to find him a new home.

The Eels were among the clubs reported to have shown some interest but at $20,000 per week, the sums didn’t add up. Now the 27-year-old is off to the Roosters for the remainder of the season, pending a more permanent home in Sydney for 2023 and beyond.

It’s difficult to say whether the move says more about the state of Lodge’s career or the season the Tricolours are enduring. The Roosters are out of the eight and skinny on quality campaigners through the middle of the field, although it’s doubtful the cut-price, late-season signing of Lodge will dramatically shift the needle.

Quite aside from his infamous incident in New York, which almost ended his NRL career before it really began, Lodge has enjoyed the support of some influential boosters in the game and the media. When you have friends like Wayne Bennett, that’s enough to open plenty of doors.

But the output hasn’t even come close to the reputation with which he arrived on the scene. Lodge was regularly touted as a future mainstay for the Blues and Australia but as the game became electrified with speed under the rule changes, Lodge found it difficult to make an impact. 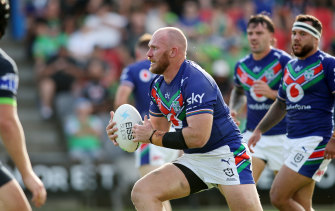 Matt Lodge hasn’t become the star some predicted but he may be of some use at Bondi Junction.Credit:NRL Photos

He arrives at Bondi Junction as a reasonably performing front-rower who must find a way to take his game to a whole new level if he is to help Trent Robinson get his famous club pointing in the right direction at the back end of the campaign.

It’s a curious purchase for Robinson, although if anyone can find a way to get the best out of Lodge, it’s probably him. But Roosters fans hoping Lodge will become the ‘enforcer’ they need through the middle of the field shouldn’t hold their breath.

These days, Lodge is just a solid part of a forward rotation, not a star middle who can dominate a game like young lions Payne Haas or Tino Fa’asuamaleaui. But it would be naive to think Robinson has spent his money foolishly and Lodge might just be the right man, at the right time, at the right price.

Once one of the most-feared packs in the game, the Roosters haven’t been able to establish themselves in the trenches in 2022. Injuries to Jared Waerea-Hargreaves and Victor Radley have left them vulnerable and no amount of young talent can make up for the lack of a few grizzled, battle-hardened NRL pros.

That’s where Lodge can be useful as the ninth-placed Roosters try to crawl back into the finals spots heading into the business end of the season. He’s tough and rugged, which might just be enough for Robinson as he tries to build some late momentum in a season that has been more challenging than most anticipated.