The wife of rugby figure Israel Folau has hit out at comments from Peter V’landys over the Manly pride jersey scandal, comparing the issue to her husband’s religious controversies.

Folau, who Rugby Australia famously sacked in 2019 over a series of homophobic social media posts, signalled a desire to join the NRL last year but failed to sign a contract following intense backlash from fans.

Amid the Manly pride jersey controversy, Folau’s wife Maria has taken the opportunity to call out what she believes is hypocrisy from V’landys and the NRL on the issue.

Seven Manly players have pulled out of Thursday night’s match against the Roosters over the club’s decision to wear an “inclusivity jersey” as part of the women in league round.

On Instagram, the former Silver Fern posted an article on her story with comments from V’landys who was quoted saying: “We’re all human beings at the end of the day.” 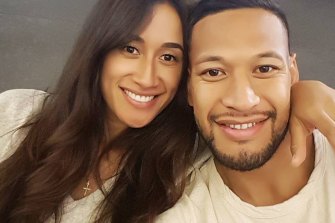 “But at the same time, you have to respect the player’s religious and cultural beliefs. Those players are taking a stance, and they have every right to.”

In response she wrote above the comments: “We’re all human beings at the end of the day …Umm so what’s Izzy??….A donkey?”

“The hyspocrisy (sic) from this man and this organisation @nrl #PeterVlandys What a joke!!!” 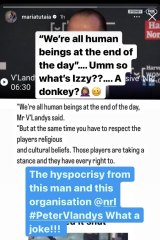 Maria Folau has weighed in on the Manly jersey controversy. Credit:@mariatutaia

After Folau signalled his desire to join the NRL, V’landys said he would decide whether Folau would be allowed to play when a contract was offered to him, but had previously made his opinion of the former Wallaby clear.

In his second day as chairman of the Australian Rugby League Commission, V’landys made a strong statement against Folau saying: “The game is inclusive. The comments of Israel are not inclusive.”

Folau’s $5 million Rugby Australia contract was torn up in 2019 after he refused to take down an Instagram post that quoted Bible scripture and said “hell awaits” homosexuals and other sinners.