Sydney’s banged-up star Isaac Heeney has vowed to never change the way he attacks the football after revealing the full extent of the injury battles he has faced this year.

Heeney won the Goodes-O’Loughlin medal for best on field in Sydney’s impressive 22-point win over Carlton on Sunday, kicking three goals in a match-winning performance that prompted former Melbourne great Garry Lyon to describe him as one of the AFL’s most marketable players, behind only Lance Franklin and Dustin Martin. 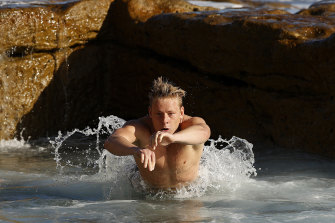 Isaac Heeney during a recovery session at Bondi Beach.Credit:AFL/Phil Hillyard

“For me a lot of it is recovery, and then try and get a training session in throughout the week,” Heeney said. “If I get one in, I’m more than happy with that, and then go into a game feeling as fresh as I can and hope for the best.”

Heeney has no intention of dialling back any aspect of his game to protect his body, either, although he did admit Longmire’s advice was to deploy a bit more ‘smart courage’ at times.

“My thumb was just from a tackle, hitting someone’s elbow, just freak accidents like that,” he said. “My ankle was obviously one of those freak accidents, not from contact necessarily … but I’ll play the game hard and I’ll always play it hard. That’s the way I’ve always played it and that’s what ‘Horse’ loves from me, so I’ll keep playing that.”

The Swans are waiting on word from the AFL as to where they will play Saturday’s scheduled away clash against St Kilda. Victoria is off-limits due to the growing COVID outbreak in Melbourne, with the SCG and Cairns’ Cazalys Stadium touted as the possible venue options. 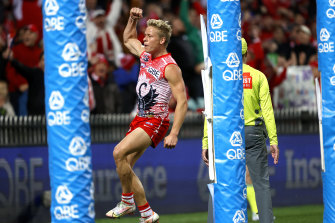 Longmire is hopeful of regaining ruckman Tom Hickey (knee), while Franklin – who kicked three goals against the Blues, along with Heeney and Tom Papley – has pulled up well and is expected to play.

Heeney said there was a notable difference in how much freedom he is afforded by opposition defenders when Franklin is in Sydney’s 22.

“He’s obviously that big figure they want to stop, so he’s going to draw more than one person to him and our goal is to try and counteract that and not always go to him,” he said.

“You just see, some of the stuff he brings out – there’s a reason why he’s a superstar, one of the best to ever play the game.

“Two v ones on the weekend, outbodies, marks and kicks a goal … that sort of stuff’s pretty special and he’s obviously playing some really good footy at the moment and kicking goals for us.”