Jarome Luai had the last laugh after being blindsided in his most recent stoush with Cameron Munster, but the Melbourne maestro’s career-best form ensures he won’t be missed in Magic Round’s top-of-the table clash.

Luai and the Panthers are on the bounce from their first loss of 2022 against Munster and the Storm, the first of potentially four individual clashes between the two playmakers in the next two months as Origin looms.

Suncorp Stadium was the scene of Penrith’s epic 10-6 preliminary final upset of Melbourne last season, when Luai was controversially felled high by Munster and forced off for a HIA without any penalty.

Luai said any blowback over the tackle was “left on the field” last year as keeping Munster quiet shapes as Penrith’s biggest challenge come Saturday night.

As the Dolphins continue to circle the Queensland and Kangaroos incumbent amid talk of a deal worth over $1 million a season, Munster’s four tries, eight line break assists and 10 try assists already have him set to eclipse his season-best tallies in each statistic after just eight games. 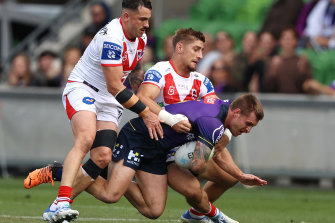 Cameron Munster is tackled by Zac Lomax and Jack Bird at AAMI Park.Credit:Getty

Despite a quieter campaign to date, Luai is shaping once more as the Blues No.6 alongside Nathan Cleary after his starring role in last year’s first two games before succumbing to injury.

Melbourne’s Ryan Papenhuyzen is due for scans on Tuesday and is facing up to a month out due to hamstring and knee issues that are expected to scupper his own Origin hopes.

Meanwhile, rising Broncos star Selwyn Cobbo has been disqualified from driving for six months and fined $700 with no conviction recorded for traffic offences.

Cobbo appeared in Nanango court on Monday and was charged with driving an un unregistered and uninsured vehicle while on a suspended license. The 19-year-old has been one of Brisbane’s best in recent weeks and is in extension talks with the club as they aim to keep locked up long-term.

“I know I’ve done the wrong thing and I take full responsibility for that mistake,” Cobbo said in a Broncos statement.“I’ll learn from this and I will strive to make better choices in the future.”