Former Carlton defender Liam Jones has stopped playing with Palm Beach-Currumbin in the QAFL to minimise the risk of injury ahead of a likely AFL return.

His manager Shane Casley told The Age, Jones had not yet agreed to join an AFL club but decided it was safer to stop playing with the Queensland-based club as AFL clubs considered adding him to their list in 2023.

Jones will continue as an assistant coach at the club where he has made a positive impression in 2022 after choosing to retire from Carlton and the AFL last November after he refused to adhere to the league’s mandatory vaccination policy and reached a settlement with the Blues.

AFL clubs have been sounding him out since the league decided to end their mandatory vaccination policy and replace it with one that “strongly encourages” players to be vaccinated.

The 31-year-old has met with Essendon list boss Adrian Caruso on the Gold Coast and then caught up with Western Bulldogs’ football manager Chris Grant at his house in Melbourne recently as he considers his options to restart his career. 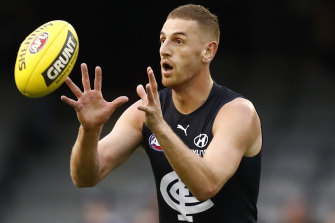 Anne Cornish, the president of Palm Beach Currumbin, told The Age Jones’ presence at the club had been a positive throughout the year and his teammates respected his decision as he had been upfront with them all year about his hopes to return to the AFL.

“He’s not leaving the club, he’s remaining as an assistant coach. He’s been the assistant coach for the seniors, or one of the assistant coaches, since day dot. So he’ll just continue in that role and not play, to prepare for whatever may occur. I don’t know any details around who’s approached him, or what,” Cornish said.

“He’s been amazing. He’s great with the kids – we’ve got what we call the Colts, which are the under-19s, he just continually offers advice. He’s a great clubman, participates in events. You couldn’t ask for a better footballer, really he’s the overall package, and just a lovely bloke.

“He let them know, he wanted to. First of all he announced that he’s got an opportunity to possibly play AFL, and they thought that was amazing. Then he went through and explained that he wouldn’t be playing, and there was a standing ovation, even after that, just to wish him well. I didn’t realise how much respect and genuine like they had for him.”

The Blues have applied to the AFL for compensation for the loss of Jones due to an AFL rule which has since been changed clearing the way for the intercept marking defender’s return.

Carlton do not intend to recruit Jones, but they have argued for compensation because they have made list decisions to recruit and contract other players on the basis he had retired and therefore would not be able to play for another club for 18 months.

They added Lewis Young in the trade period, kept Oscar McDonald on their list and recruited Sam Durdin in the mid-season draft after a wave of injuries to key defenders in the first half of the season.

The Blues will not try to disrupt Jones’ return but think receiving compensation would be a fair outcome which might see the club granted a pick in the draft or Jones return to their list for them to receive compensation when he joins another club.

COVID forces Tuohy out but no other Cats affected

His diagnosis comes on the back of four North Melbourne players and their coach Leigh Adams being diagnosed with COVID following their trip to Hobart and although the Cats have not been more widely affected it will raise more alarm bells for clubs in contention travelling interstate on commercial flights ahead of the finals.

Clubs and the AFL have become concerned about the prospect of a team’s performance in crucial games before and during the finals being impacted by availability as another wave of COVID surges through the community.

The Brisbane Lions dropped an important match against Essendon in round 17 when they were forced to make nine changes after COVID forced players to miss the game. 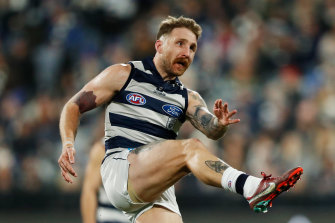 The Cats have lost a vital player ahead of their clash with the Western BulldogsCredit:Getty Images

However, they have bounced back in the past fortnight to win consecutive matches and will travel to Melbourne to face the Tigers in round 20.

The Western Bulldogs are the only finals contenders that does not have at least one more game away from their home state in the lead in to the finals, however, if they qualify for finals, there is a chance they would need to play interstate with clubs hoping they can have charter flights to limit their exposure to COVID when travelling.

With Tom Stewart returning from suspension the Cats have a ready-made replacement for the in-form Tuohy.

Western Bulldogs coach Luke Beveridge has called on the AFL to scrap the sub rule and merely expand the interchange bench to five players.

The medical substitution rule was hastily introduced on the eve of the 2021 season and was only meant to be used if it was reasonably determined a player would be medically unfit to participate in any match for at least the next 12 days.

But players who are subbed off are often cleared to play the next week, sparking questions about whether coaches have been exploiting the rule to gain a tactical advantage.

Richmond coach Damien Hardwick has come under fire after subbing off Ben Miller for the speedy Maurice Rioli midway through the final quarter of last week’s draw with Fremantle.

Miller didn’t have a visible injury but Hardwick strongly denied the subbing was used for tactical purposes, saying the tall defender was battling a calf complaint.

Beveridge said the best way for the confusion to be taken out of it is by scrapping the medical sub rule and instead allow coaches to field five-man benches.

“Right at the start, quite simply, my drive was just if we think we need one (interchange player) as a buffer for concussion, don’t make it a sub,” Beveridge said.

“Just say you’ve got five on the interchange and can use them if you want.

“And that will add a bit of tactical intrigue.

“I’m not going to circulate five players during the game. Four is almost one too many anyway.

“So you’re likely going to sit one down until you really need that player.

“You could introduce that player for a quarter here and there and it creates a different angle. All it does is it removes all the red tape.

“We don’t have to explain ourselves if you take a player out of the game and it’s just so simple, but we don’t usually make simple, practical decisions, unfortunately.”