Melbourne have held out a brave but outclassed Gold Coast Suns, notching their second win of the season in a match dominated by exceptional performances from Luke Jackson, who outshone his captain Max Gawn in the ruck and around the ground, and Christian Petracca, who finished with a personal best 41 possessions and 14 inside-50 entries for his side.

Jackson’s bullocking work around the clearances was complemented by precocious skill at ground level, underlining the superstar quality he showed in last year’s grand final. Other sterling players were Clayton Oliver, Alex Neal-Bullen and Jake Bowey, who swept up everything that came his way in defence. 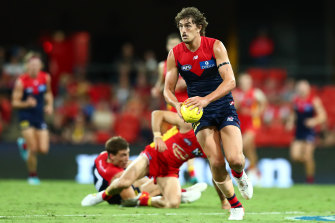 The Suns were undaunted, though, and getting within three kicks of the defending premiers is a fair measure of their improvement. But they ran out of contributors: Touk Miller was his usual prolific self with 38 possessions, Noah Anderson and Sam Collins were excellent, but it tailed away from there.

The Suns also battled an inability to finish in front of goal. Already sorely missing their spearhead Ben King, they lost their best small forward Izak Rankine pre-match to a corked quad. His replacement, Sam Flanders barely touched the ball; ditto Alex Sexton and Jack Lukosius, who was groomed for a forward role over the pre-season. 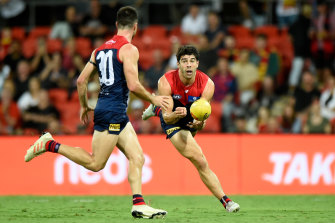 They matched Melbourne in the middle early – Miller had an extraordinary 17 possessions for the quarter, Matt Rowell 11 – but were less composed going forward. For Melbourne, the game-breaker was Jackson, who took over in the ruck from Gawn and kicked the Demons into gear after a sluggish start with five early clearances and a goal.

He hit Gawn with a bullet pass for Melbourne’s first, plucked another goal himself from a boundary throw-in, and was the dominant figure to half-time despite Petracca and Oliver already having 42 possessions between them, Petracca having already gained more than 650 metres for his side.

The Suns kept hitting back when it looked like the game was about to be taken away for from them: Mabior Chol, Alex Davies and Noah Anderson all kept the Suns in touch with goals against the run of general play. It was a late fade that cost them, with the Demons taking a 14-point advantage into the main break. 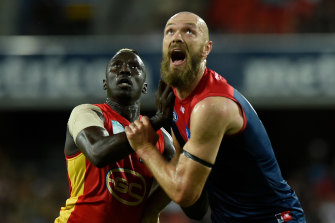 From there, they did little more than hold the Suns at bay. A perfect play by the Suns from the opening bounce of the third quarter led to a goal by Levi Casboult, but Bailey Fritsch found the immediate reply. A brilliant goal to Kysaiah Pickett late in the quarter broke the game open, a 22-point lead more than enough.

The game meandered to an anti-climactic close, with Anderson and Lukosius kicking the only two goals for the quarter, the last of them drawing the final margin back to a respectable 13 points. More performances like this, and the Suns will win plenty more games. But the Dees did enough, and in round two, that will do.