Carlton skipper Patrick Cripps capped off a brilliant season in which he re-emerged as a true force by being crowned Brownlow medallist after an exciting count at Crown Palladium on Sunday night.

Cripps, 27, began the 2022 season under pressure to return to his best form, and did just that, polling 29 votes, including three votes in the final-round loss to Collingwood to secure a dramatic victory.

“I don’t know whether to laugh or cry … it’s unbelievable. I can’t put it into words – it’s a massive honour,” Cripps said. 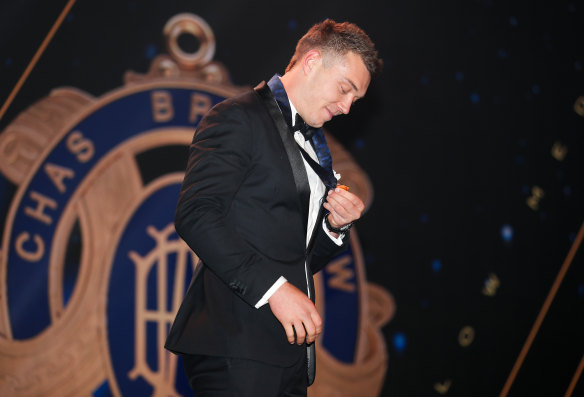 Patrick Cripps is the 2022 Brownlow Medallist after a dramatic count at Crown Palladium wasn’t decided until round 23.Credit:Getty Images

It was an honour that almost never was for Cripps, who had to fight a rough conduct charge twice after a round 21 collision that concussed Brisbane’s Callum Ah Chee. Offered a two-game ban by the match review officer, the tribunal upheld the suspension, before the appeals board cleared him, meaning he remained eligible for the award.

Yet to play a final in his nine seasons at Princes Park, Cripps, a West Australian native, said he had idolised Chris Judd and Ben Cousins growing up, and had learnt from Judd when the pair shared time at the Blues. 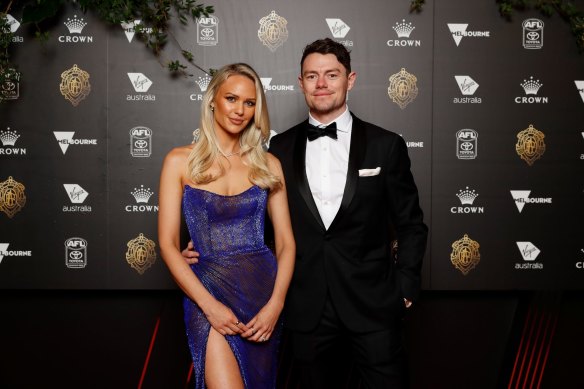 Lachie Neale, pictured with wife Julie, was in the thick of the counting action on Sunday night, and had the lead after round 11.Credit:AFL Photos

“As a player, we have been down the bottom for a lot of years. I feel like we are really building now.”

Cripps retold the story of how he had refused to give interviews early in his career because he had a stutter, but the power of positive thinking – a motto he lives by – along with work with former teammate Michael Jamison and the club psychologist helped alleviate his issues.

Brisbane Lions gun Lachie Neale had jumped to 28 votes, having polled one vote in the final round against Melbourne, before the votes were read for the final game of the home-and-away season between the Magpies and Blues. Gold Coast co-captain Touk Miller finished third on 27 votes in a year when his team had an equal-best 10 wins. 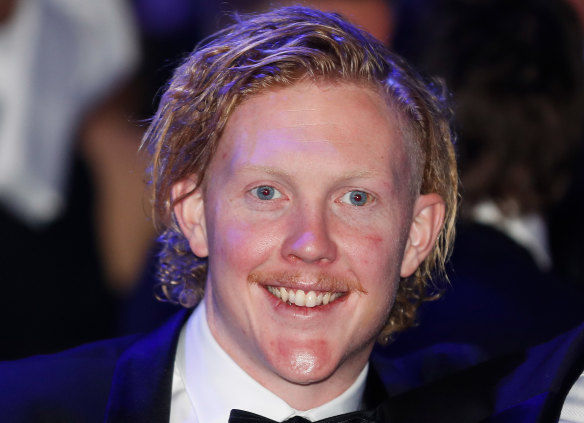 Melbourne star Clayton Oliver was an early favourite for the top award.Credit:Getty Images

The Brownlow count was moved from its traditional Monday night slot due to the recent death of Queen Elizabeth II.

The Blues began the campaign with an 8-2 win-loss record, with Cripps enjoying five best on grounds in the opening nine rounds. Fresh in body and mind, he had 30 disposals and three goals against Richmond in the season opener, and followed up with 35 touches, including two goals, against the Western Bulldogs a week later.

He overcame a tough patch in the middle of the season. The Blues won only four of their final 12 matches, losing their last four, but it did not matter. Cripps became the sixth Blue to win the sport’s highest individual honour, and the first since Chris Judd in 2010.

Neale fell just short of becoming the first dual Brownlow medallist in the Lions’ history, while Miller had a night he won’t forget. Neale and Miller were joint leaders after round 22 when Miller polled two votes, ensuring a pulsating final round. Miller did not poll a vote in round 23. 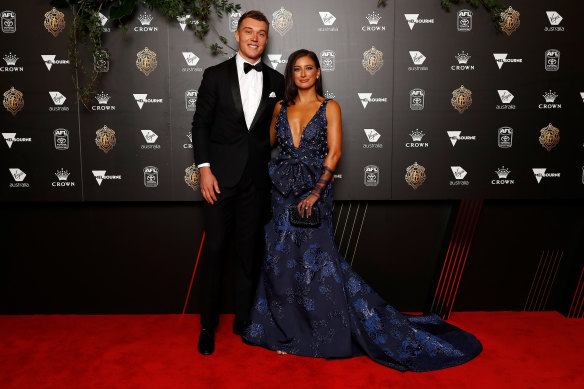 Patrick Cripps, pictured with partner Monique Fontana, had five best on grounds in the opening nine rounds of the count.Credit:Getty Images

After 15 rounds, Neale led with 21 votes, one ahead of Fremantle’s Andrew Brayshaw and Cripps, while Melbourne ball magnet Clayton Oliver was just behind that pair.

Miller, who said his career sprung to life after a 36-disposal effort against Sydney in round six in 2021, was also challenging. Geelong forward Jeremy Cameron surprisingly leapt into fifth spot, but Neale extended his lead to four votes after being best on ground against the Western Bulldogs in round 16.

Brayshaw, with 36 disposals against St Kilda, delivered three votes in round 17 to cut Neale’s lead to one, while Cripps and Miller also tightened the race.

The squeeze was on in round 19, when Miller was best on ground against Brisbane, closing to within two of the lead, while Cripps polled two votes against Greater Western Sydney, and Brayshaw polled one vote against Richmond, leaving him in a tie with Neale on 24 votes.

“It’s a crazy leaderboard up there,” Neale said.

In a dramatic round 20, Cripps regained the lead with three votes (26 overall) for his 41 disposals in a loss to Adelaide, while Miller was also best on ground against West Coast with 31 touches. Brayshaw’s one vote against Melbourne left him locked on 25 with Miller.

Neale regained the lead with the maximum votes in round 21 against Carlton, coming as Cripps did not poll. Oliver, best on ground against Collingwood, leapt into fifth spot.

Miller, with two votes against Geelong in round 22, then joined Neale on top of the leaderboard, with a round remaining.

After AFL chief executive Gillon McLachlan opened proceedings, Cripps and Brayshaw began in a rush, each enjoying seven votes after the opening three rounds, including two best on grounds. Melbourne’s Christian Petracca and Port Adelaide veteran Travis Boak had six votes, while Neale and Oliver had five, the latter polling in three games. After five rounds, Neale and Petracca, the latter with three bags of maximum votes, were joined at the top of the leaderboard on nine votes by Adelaide’s Ben Keays.

Cripps joined Petracca in the lead with maximum votes in round six against Fremantle, while Oliver was also dominant, against Richmond. When Cripps had his fourth best on ground, coming in round seven with 35 disposals (18 clearances) against North Melbourne, he had the outright lead, with 13 votes. Oliver, with two votes, and Neale, with his third best on ground, continued to press, while Miller had maximum votes after 36 disposals in a loss to Collingwood. 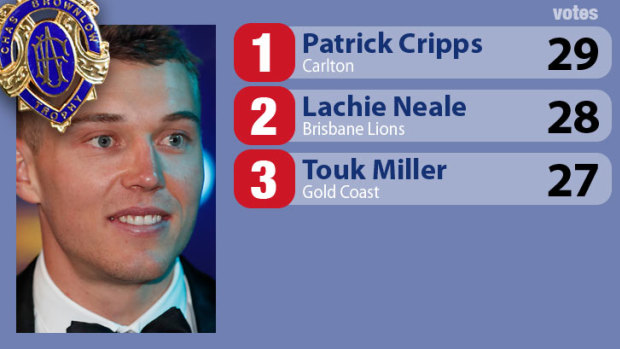 The 2022 Brownlow top three, after a tight count.Credit:The Age

Cripps had maximum votes for a fifth time after 35 disposals against the Crows in round eight, but Oliver and Neale also were busy. Neale joined Cripps in the lead after his best on ground with his 36 touches against the Crows, while Petracca, with his fourth bag of three votes, and Miller also made a move. After nine rounds, Neale and Cripps led with 16 votes apiece, Oliver and Petracca three votes behind. Brayshaw, who said he did not have any pre-prepared notes if he won, was on 12.

Neale made his move in round 11, polling three votes for his 36 disposals against the Crows, edging ahead of Cripps by two votes and Oliver by three.

Oliver, despite 43 disposals and a goal in the Queen’s Birthday clash against Collingwood, polled only two votes in round 13, coming as Brayshaw completed back-to-back best on grounds to leap into second place, behind Neale, who polled two votes against St Kilda.

Joel Selwood won the Jim Stynes Community Leadership Award for his work in the Geelong area.