‘It’s a good reason to wear it’: NRL caves to Souths’ Indigenous strip

The NRL have caved and allowed South Sydney to wear their Indigenous jersey two weeks in a row, starting Sunday in Dubbo in a match which will double as Latrell Mitchell’s return from suspension.

There was an ugly stand-off brewing between Souths and League HQ because the latter did not want any special playing strips being worn before the official Indigenous Round, which will be held in round 12. 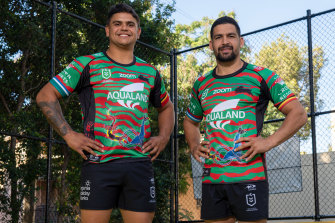 “For all those reasons we thought it made sense to wear this wonderful jersey on Sunday and then again for Indigenous Round.”

As of last Monday the NRL and Souths were still digging their heels in about what jersey would be worn against table-toppers Penrith.

Children involved with the Souths Cares program came up with the concept on the front of the jersey, including the totems of the sand goanna and whale, which represent the Redfern and La Perouse areas respectively. 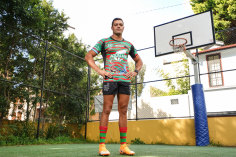 It will come as a shock to most fans, but Souths owner and Hollywood megastar Russell Crowe designs most of the club’s alternate strips, except the Indigenous one.

Burns and Mitchell spent time in Sydney’s western suburbs on Monday running clinics and encouraging people to get the flu shot on behalf of the Wellington Aboriginal Corporation Health Service.

Burns, who has family in Dubbo, said the community would appreciate seeing some of their rugby league idols wearing the playing strip.

“There are a lot of kids out there who look up to NRL players, especially guys like Latrell and Cody and ‘Gags’, so to go out in that jersey and show the kids we are blackfellas and we’re proud of it, hopefully it gives them something to look forward to and it inspires them – it’s a good reason to wear it,” Burns said.

“There is a huge Indigenous population out there.”

Souths won three of their past four games while Mitchell served his four-match dangerous contact suspension, and know how timely his return is against a red-hot Penrith.

The Panthers will have plenty of support given several players grew up in the area, including centre Matt Burton.

“Latrell is such a good player, he’ll have a point to prove when he comes back, there’s such confidence when he’s back, and it also puts Cody Walker back into five-eighth where he plays so natural,” Burns said.

“If you look at his tries and try assists he brings points to the club, but his knowledge at fullback, he’ll also set our line properly.

“I watched a bit of that Penrith game and they have attacking flair all over the park. A lot of our focus this week will be on our own defence, they can score from anywhere.”