It’s a gamble, but the Western Bulldogs should target Toby Greene

Follow all the action from Friday’s Giants-Bulldogs clash with our live blog from 7.30pm AEST

Every good story needs a hero and, of course, a villain.

When the Western Bulldogs meet GWS in Canberra on Friday night, those roles are clearly defined.

On the one hand, there’s Marcus Bontempelli, the clean-cut Dogs skipper who is almost universally admired for his talent and the way he conducts himself.

Every team in the league would have him. But while Greene is clearly respected, he probably doesn’t enjoy the same amount of love from the many opposition players and fans he’s antagonised over the years.

This is a great modern rivalry with a genuine dislike for one another.

It’s continued to grow from the moment the Dogs upset the Giants in that famous preliminary final back in 2016, before going on to win the flag.

It was the elimination final of 2019 that the Giants, and Greene in particular, targeted Bontempelli in a sustained physical attack that quelled his influence. 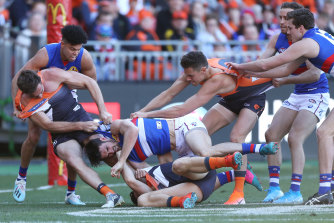 It was a tough physical encounter in the finals two years ago.Credit:Getty Images

Last year in round three, the Giants sent Nick Haynes to the toss – seemingly in a bid to put Bontempelli off his game after he broke Haynes’ larynx the season prior.

The Dogs got revenge in a spiteful encounter that Greene missed due to injury.

It’s unlikely Bontempelli would have forgotten those mind games or the treatment he got from Toby in that final two years ago.

If it’s in his nature, I’d love nothing more than ‘the Bont’ to get on the front foot tonight.

There’s no need for anything outside the rules, but he and his team-mates should get in Toby’s face from the first bounce.

They should block and bump him at every opportunity. After all, he has been the Giants’ barometer in recent matches, even if he was inaccurate against the Swans last week with 1.7.

Before that he booted five goals in consecutive games against Melbourne and Collingwood.

There’s always the danger with a player like Toby, that by going for him you’ll only fire him up more. I’ve seen many a superstar targeted, and many take it as a compliment.

It can sharpen your focus and ignite another level of hunger for the contest.

But (for some) it can also be tiring and distracting.

While Toby might love a scrap, can the Dogs get under his skin enough to draw an undisciplined act and a few free kicks out of him?

Can they shift his focus from the footy, to the fight?

The important thing will be doing it the right way. I’ve always believed you can’t manufacture bravado. Many teams have tried and failed and the good players, like Greene, will see right through it.

During my time at North Melbourne, we were lucky.

You can’t get away with the same intimidation factor now, but if Greene strutted into the forward-line against a ’90s Kangaroos team he’d have one of Glenn Archer, Dani (formerly Dean) Laidley, or Mick Martyn wanting to knock his head off.

They didn’t need any instruction from the coach; it came naturally.

Looking at the Bulldogs’ backline, and even their team as a whole, they don’t really have a natural enforcer.

Tom Liberatore is probably one player up for that sort of battle, as we know the Liberatore family doesn’t mind a scrap, but outside of ‘Libba’ the next in line is less obvious.

Still, if the Dogs, as a unit, bring a level of ferocity, at both Greene and the contest, they may just have an impact on how he performs.

It will be intriguing to see where Toby’s head is at.

Named vice-captain at the start of the year, and now captain in the absence of the injured Stephen Coniglio, he seems to be one of those players who thrives in a leadership role.

He’s the type of captain that makes his team-mates walk taller. He’ll also know the Giants will need something special to beat a team that, on paper, is clearly superior.

But will the captaincy affect his thinking?

Will that level of responsibility ensure he feels the need to be more measured and controlled? Could it inhibit his natural aggression and edginess?

Those questions will soon be answered.

Even for the best teams we’ve seen time and time again, if you target those at the top it can send a message to an entire group.

So, who throws down the gauntlet first?