‘It just felt like home’: Former Tiger emerges as a leader of the Suns

Gold Coast got more than they bargained for with Mabior Chol. Not only have they recruited a consistent goalkicker (31 in 15 games), but the man who walked into their club as an unrestricted free agent was also a natural leader.

The eldest of seven children, Chol, born in South Sudan, was fleetingly referred to by coach Stuart Dew as “Big Daddy”, for the way the young players looked up to him. The name has stuck. 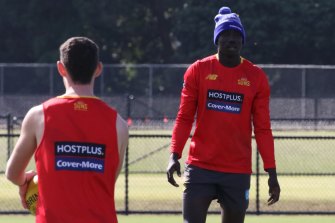 Young players at the Suns look up to Mabior Chol.

Chol has been a revelation since his move north. A humble and shy figure, the former Tiger admitted he struggled with elements of living in Melbourne.

He was away from his mum, dad, four brothers and two sisters. He loved playing for Richmond, but the problem was that he rarely played. Being involved in 31 games in six seasons makes it difficult for anyone to learn and grow.

Now, he’s much closer to his family. They drive from Brisbane every second week when the Suns play at home. He hasn’t missed a game for his new club (and has kicked at least a goal in every game) and to top it off he can walk down the street without anyone recognising him. Big Daddy is home.

“I think that’s why I’m playing some really good footy, just being able to see my family all the time,” Chol told The Age as he made his way into the club for a captain’s run, ahead of Saturday night’s clash with his old team.

“There’s some good weather up here as well,” he said with a chuckle as he reflected on the gloomy Melbourne winters and the chilly training sessions at Punt Road.

Chol has always been a chiller. In fact, some coaches and teammates quipped this week that he’s so relaxed sometimes they wonder if he’s asleep.

But as for the role of being a mentor, there is no sleeping on the job. Players such as Izak Rankine, Joel Jeffrey and Chol’s fellow South Sudanese teammate Mac Andrew are all cubs under the former Tiger’s care.

“Somehow I feel like I’ve become a bit of a mentor around the football club. Young Mac Andrew, I’ve worked really closely with him and we do gel a fair bit, especially coming from a similar background.”

Chol speaks glowingly about his former club, although he was being weighed down by a lack of playing time.

He made his debut in 2016 and then wasn’t seen again until 2019. In that time, the Richmond had gone from laughing stocks to powerhouses looking to win multiple premierships.

Breaking into that team was always going to be difficult.

“I knew it was going to be hard to get in the squad with [Tom] Lynchy and Jack [Riewoldt] probably playing career-best footy. For me, it was probably more about wanting more opportunity and I knew I wasn’t going to get it behind those two boys. 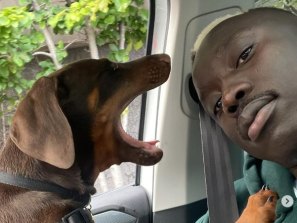 Reggie the doberman, with Mabior Chol, from Reggie’s Instagram account.Credit:Instagram

“I kind of knew what I was capable of, it was more getting the opportunity to get exposed playing senior footy. I knew I was going to get better the more games I played.”

Chol’s relaxed demeanour allows him to fit in perfectly on the coast. When he’s not training or driving to Brisbane to spend time his family, he’s playing another type of father figure.

His “son” Reggie is 11 months old and the two are inseparable. To be clear, Reggie is a doberman who Chol refers to on his Instagram page as his son. Reggie also has his own account.

Like his “father”, Reggie was in Melbourne and had to be left with a friend while Chol completed his COVID-19 isolation on the Gold Coast. But after a short plane ride north, the two were reunited.

‘Melbourne is a place where you can’t really get away from football because everyone is so passionate about their footy.’

Reggie is named after NBA star Reggie Miller, a famous three-point shooter in the 1990s who spent a decent portion of his career defending the great Michael Jordan.

The duo spend a lot of their time walking the streets of the Gold Coast or at the local dog park where Reggie gets to run wild and Chol gets to shoot some threes.

It’s a significant change of scenery.

“Obviously, Melbourne is a place where you can’t really get away from football because everyone is so passionate about their footy. The AFL does demand a lot and you’re not always going to play perfect football,” he said.

“When I was down at Richmond, I was probably struggling a bit, just because you’re not playing footy well and not getting the opportunity. But since I’ve been here I’ve just been in a clear mindset.

“Personally, my happiness has just taken care of everything else.”

“It will be nice to see them and give them a hug. But once the footy starts, then it’s enemy territory,” he said.