‘I’m the phantom biter’: The day Raudonikis sank his teeth into rookie

Tommy Raudonikis, as was custom during his playing days with the Newtown Jets, was partial to a beer with his coach and teammates.

On one such occasion, while in the company of mentor Warren Ryan, he turned to fellow drinking partner Geoff Bugden. At the time, Bugden possessed perhaps the largest frame in rugby league. 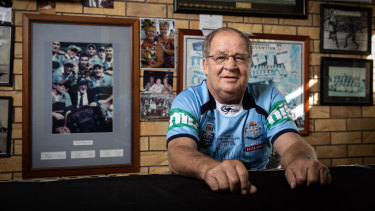 On the day of his first-grade debut, John Gibbs was the opposition halfback. Gibbs’ first assignment as Manly playmaker was marking up on Raudonikis in a top-of-the-table, Silvertails vs Fibros clash at Leichhardt Oval.

“The first time I got the ball, I ran at Tommy and he jumped on me, got my nose in his mouth and went grrrrrrrrrrrr,” Gibbs recalled. “He vigorously shook his head, with my nose still in his mouth. 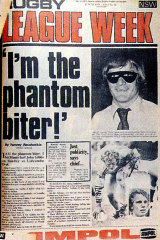 Gibbs didn’t give up the name of his assailant after the match. As speculation swirled about his identity, all was revealed in the next issue of Rugby League Week magazine.

Wearing a mask and fangs, Raudonikis outed himself on the cover under the blazing headline: “I’m the phantom biter!”

Despite the rocky start to their relationship, Gibbs and Raudonikis became buddies. They toured England as part of the 1978 Kangaroos squad and even bought a car together, an old Vauxhall Viva, in which to explore the countryside.

Raudonikis forever left the vehicle parked illegally, resulting in more than 50 parking tickets being jammed under the windscreen wipers. It had become apparent that the resale value of the car was less than what they owed to the authorities.

As the tour came to an end, Gibbs asked his senior playmaker what they should do.

The response was pure Raudonikis; he waited until it was dark before driving to a remote embankment in Leeds.

“And then he pushed the car into the river and away it floated,” Gibbs said.

Raudonikis has remained a popular character long after his playing days. Brad Fittler who played under Raudonikis at State of Origin level, called upon him when he first picked up the clipboard for the Blues.

Before Fittler’s first match in charge, in which he blooded 11 debutants at the MCG, he asked Raudonikis to address the troops over speakerphone.

“He has had so much to do with NSW and I wanted to make that connection to the current players,” Fittler said.

“They were all very young, we had 11 blokes on debut and we wanted him to have a chat with them.”

Raudonikis later got the chance to present the jerseys to the NSW forwards for a match in Queensland.

“He put it on a few of our front-rowers, bagging them and telling them they weren’t tough enough,” Fitter grinned.

“It was great. It was Tommy to a ‘T’. He shied away from nothing and no one, he just said what he thought.