‘I want to help others battling brain cancer’: How a young Shark won his fight

Fine Kula is done with seeing medical clipboards, so he’s picked up a coaching one instead.

When Kula was diagnosed in 2020 with an aggressive brain cancer rarely found in adults, there were fears it would end not only his promising football career, but also his life.

Football was the least of Kula’s concerns as he made countless hospital visits to undertake excruciating blasts of radiation and chemotherapy.

There were moments when it was touch and go, but late last year he got the news that he was officially in remission.

“Getting that cancer clear was a real blessing, to be honest,” Kula said.

With his health improving, Kula has taken to coaching, helping to oversee teams at former school Endeavour Sports High and the boys and girls junior Sharks squads. He was an assistant coach of Cronulla’s Harold Matthews team that made it all the way to this year’s grand final. 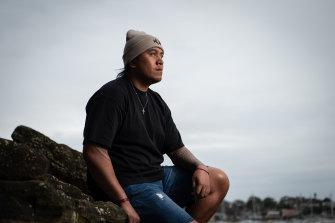 Fine Kula showing his support for Beanies for Brain Cancer Round, an initiative led by the Mark Hughes Foundation.Credit:Flavio Brancaleone

It has sparked an ambition to potentially seek out an NRL head coaching role at some stage, a goal not as unlikely as it sounds given the setbacks he has already overcome in beating cancer.

“Yeah, it’s a dream,” Kula said. “At the moment, I’m just going to focus on the juniors, the boys and the girls. I’m trying to provide guidance for them, help them to become the best footy player they can be and the best person they can be.”

Kula is sharing his story during Beanies for Brain Cancer Round, an initiative led by the Mark Hughes Foundation since 2014. The money raised goes towards research for treatment in the hope of one day finding a cure to brain cancer.

It’s a cause close to Kula’s heart after his battle with Sonic Hedgehog medulloblastoma.

“I’m lucky enough to come through the other side with my treatment.”

“I’m lucky enough to come through the other side with my treatment, but I fully understand some families have lost loved ones to brain cancer,” he said. “There might be family members going through something right now with their treatment.

“The Mark Hughes Foundation did help me out a lot, especially in reaching out to me and my family. They will continue to do that with other families as well.

“It’s good to support the cause. I will always put my hand up to help out families going through something like that, giving them advice.

“Brain cancer is said to be the lowest-funded cancer research. I fully understand that because when I was diagnosed with cancer they had to take my results to another country to get back to me. I didn’t know what type of cancer I had until three months after my results were sent to America.” 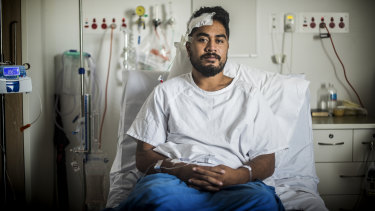 Fine Kula during his brave fight with brain cancer in 2020.Credit: Steven Siewert

Kula is juggling his coaching commitments with his role at What Ability, which arranges social engagements for people living with a disability. He said he was blessed to give back to the community after the support he received at the height of his illness, particularly the thousands of dollars in donations during the “Fight for Fine” campaign.

“The support from the rugby league community, and even strangers who didn’t know me, they all got together to help me with donations,” he said. “They took a lot of stress out of my parents’ hands. I will always be grateful for that.

“I’m not like before treatment, I’m not the same person. I’m slowly getting back my health. I’m going to the gym, getting some exercise in, building my immune system up again.

“I’m trying to stay healthy and look after myself.”