‘I play my best footy like that’: The brilliance of Maroons hero Munster

There are moments even Cameron Munster wonders what he will do next.

But only for a second, because in the blink of an eye he can turn a game inside out. He leaves defenders sitting on their heels. Those who lunge forward so often end with their ankles in a twist while their hands clutch at thin air.

Such is the sheer brilliance of the Queensland five-eighth, who has inspired the Maroons to a State of Origin series lead over the NSW Blues at Accor Stadium on Wednesday night.

Teammate Valentine Holmes couldn’t praise the five-eighth enough after the game, saying: “He’s the one that you have to be on your feet and ready to go and as soon as he gets the ball, something will happen.”

Munster was clearly the best afield in Queensland’s 16-10 win, but Pat Carrigan wasn’t far behind in a representative debut to remember. 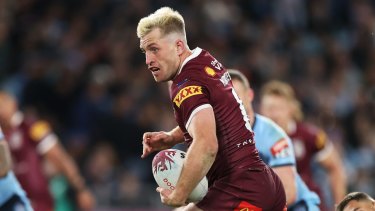 Cameron Munster was at his freakish best on Wednesday night.Credit:GETTY

Yet there was another debutant who is likely to take the lion’s share of the limelight. That would be coach Billy Slater, the former Queensland fullback who has come back for more after spending years terrorising NSW fans during an era of unprecedented interstate dominance.

Munster says the Maroons have rediscovered their sense of self-belief under the rookie coach.

“I know what Billy is like and I’ve played with him and he is diligent at what he does,” Munster said.

“He has come into the camp and he has watched some video on us and he has picked a good game plan for us against the Blues tonight.

“With guys like him and Cameron Smith and [Johnathan Thurston], they believe in the jersey and we’ve been missing that and he put a lot of belief into us and it showed tonight.

“With a lot of boys and there were questions about them being in the team but it showed; we play for each other.”

So with that belief, the Maroons head to Perth with a chance to clinch the series. The Blues, on the other hand, are fighting to save their hopes of lifting the shield for the fourth time in five years.

“It is a leg in the door but we did that a couple of years ago when we won the first game and then lost two in a row,” Munster said. “[NSW] will come out and play a good style of footy and chance it in the second game because they are down 1-0.”

Watch the State of Origin series exclusively live and free on Channel 9 and 9Now.