Comeback kid Jesse Hogan says he has rediscovered his passion for the game, as he aims to take his game beyond the lofty levels he reached as a gun youngster.

After a turbulent three years in which he has changed clubs twice and lived on both sides of the continent, Hogan is relishing the more relaxed lifestyle Sydney offers to AFL players. 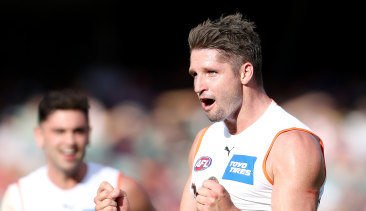 “It will take a lot of work and it’s not something you can flick the switch to but if I keep taking steps in the right direction, have a good attitude and keep chipping into all aspects of my game there’s no real reason why I can’t get back to that level again or be better.”

Hogan, who has played just 19 games in the past two seasons, admitted to having doubts he could still cut it at the top level but his performance against the Crows has dispelled some of those queries.

“It’s a little bit of weight off the shoulders,” Hogan said. “There was a sense of being in the unknown missing the start of the season, you do start to doubt yourself a bit.

“Until you play your first game and see how you fit in with the forward line you play with you second guess stuff a little bit. In a way it was a bit of relief I got that one away.

“To get a pretty convincing win and a four-quarter performance and to play your role and get on the end of a few – I’ll take a lot of confidence out of this.”

By all accounts, Hogan, who had played exclusively in football towns, is happier in Sydney, appreciating being able to pick up the paper and seeing the sports pages dominated by the NRL.

Living in a granny flat at the back of Shane Mumford’s house in Pagewood, he enjoys being out of the limelight. His love of the game has returned.

“It’s definitely helped me enjoy it a bit more. I probably lost a bit of passion for the game. Footy is a grind but you love the grind and I probably lost that passion, that drive,” Hogan said.

“It’s not the flick of a switch, it takes a bit of time. I really did enjoy my preseason. I got to do the whole preseason, which is something I didn’t get in my two years at Freo and my last year at Melbourne.”