‘He won’t be leaving’ early: Bellamy unhappy at Munster speculation for 2023

Melbourne coach Craig Bellamy is adamant Cameron Munster won’t be leaving early if he signs with another club for 2024 and beyond.

Munster has starred this season despite ongoing speculation that Queensland expansion club the Dolphins are preparing to offer him a lucrative deal to come home when his Storm contract expires at the end of 2023.

The Storm want Munster to re-sign, and Bellamy has not appreciated the continual speculation about Munster’s future when clubs are not allowed to officially start negotiating with the player until November.

“We’d love him to stay, but he has to make his own decision. We will reinforce this, and I will get support for this from higher up in the club, but it doesn’t matter where he goes he won’t be leaving at the end of this year.

“He’s got a contract for next year and the club will hold him to that.” 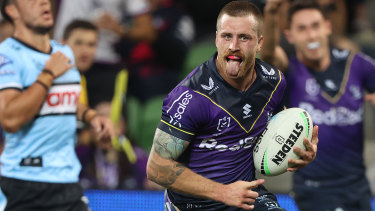 Cameron Munster was in imposing form for Melbourne against Cronulla.Credit:Getty

Bellamy made his comments as Munster and teammates were attempting goal kicks from the halfway line after their captain’s run, with Munster appearing to win judging from his celebrations.

The Storm take on the Newcastle Knights at McDonald Jones Stadium on Sunday, and that team knows exactly what the Storm are facing, given their star playmaker, Kalyn Ponga, was another Dolphins’ target until he signed a contract extension last week.

“There used to be a rule that you are not supposed to talk to people who have more than 12 months to go on their contract. But I’m not sure if it is there any more, although I think it is,” Bellamy said.

Craig Bellamy is not happy with his star five-eighth being so openly pursued.Credit:Getty

“Cameron is here for this year and next year, but it is what is. We want to keep him and we will do what we can to keep him.”

The Knights’ left edge of Bradman Best and Erick Lee is a concern for Bellamy, but he praised his side’s work this week on a six-day turnaround following the 70-10 Anzac win over New Zealand Warriors.

Storm centre Reimis Smith has passed all his head injury assessment tests this week and trained on Saturday, with Bellamy hoping he can play.

“The main reason he came off last week was because he had double-vision; I’m not quite sure it was a concussion,” Bellamy said. “But we had to take the safe way, and he’s been pretty bright this week. He’s passed all the tests, so should be right to go.”

The Storm play Newcastle Knights at McDonald Jones Stadium on Sunday at 2pm.