An internal investigation has been launched into Hawthorn player Jonathon Patton after reports the 27-year-old allegedly sent lewd images to a woman on social media.

Hawthorn Football Club released a statement on Saturday evening confirming the probe, after reports in the Herald Sun that an unnamed woman had reported the behaviour publicly. 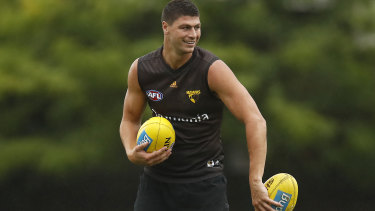 Jonathon Patton has been referred to the Hawthorn’s integrity committee.Credit:Getty

"Hawthorn Football Club is aware of allegations made on social media regarding the behaviour of Jonathon Patton," the statement read.

"The allegations are of behaviour that does not reflect the values and standards of Hawthorn Football Club.

"As soon as the club became aware of the allegations it addressed the matter with Patton directly and clearly communicated that any behaviour of this nature would not be tolerated."

The incident has now been referred to Hawthorn's integrity committee, the statement continued.

"Hawthorn advocates for equality and respect for everyone and demands this same behaviour from all involved with the club."

Patton joined the Hawks in 2020 after seven years with Greater Western Sydney.

In August he was sidelined from the season over a torn foot tendon after a multitude of such injuries over his career.

Our Morning Edition newsletter is a curated guide to the most important and interesting stories, analysis and insights. Sign up here.