The Sydney Swans lifted from five goals down to obliterate the spirited Hawks in a final-quarter rout in Launceston on Anzac Day.

Sam Mitchell’s brigade led by 32 points before the Swans got their first score on the board, but class came to the fore and the Swans finished with an avalanche of goals to over-run the Hawks by 41 points.

They won nine straight clearances early in the final term, and kicked nine of the final 10 goals of the match. 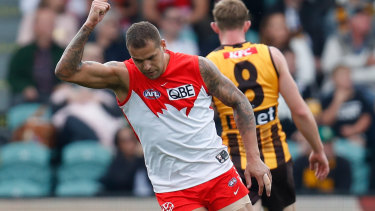 Co-captain Callum Mills and experienced midfielder Luke Parker led the charge. The 25-year-old Mills kicked Sydney’s first goal of the match, halfway through the first term, and amassed 37 disposals, six clearances and five tackles by the end of the match, while Parker finished with 29 touches and seven clearances.

The comeback had even more merit considering Swans star Isaac Heeney had little impact on the match.

Lance Franklin sprayed 3.4 but was an important contributor, while Ben Ronke was also a beneficiary of Sydney’s late momentum, finishing with three goals.

The result, however, was soured by a concussion to Paddy McCartin just before three-quarter time. Key forward Logan McDonald also suffered a concussion early in the final quarter, leaving the Swans with just three fit players on the bench.

The biggest concern out of Monday’s result was the concussion sustained by Patrick McCartin, who has been plagued by head knocks throughout his career.

The 26-year-old copped a rogue knee in the back of the head after trying to take a low mark. He was also involved in a collision earlier in the match, going back with the flight in defence.

He appeared distraught in the rooms just before three-quarter-time as the Swans substituted him out of the game for veteran Josh Kennedy. 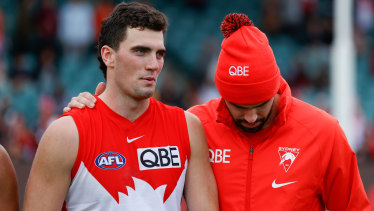 The Swans said McCartin failed a concussion test but was OK. “We will take every precaution,” the club tweeted.

McDonald was also counted out of the game with concussion early in the final term.

Kennedy capitalised on his chance to come into the game, finishing with 11 disposals and two clearances in a quarter of footy.

On Easter Monday against the Cats, the Hawks kicked five of the first six goals to set up their unexpected win.

And on Anzac Day, they looked as similarly sharp early, putting up five goals within a blink of an eye against the shell shocked Swans.

The fast start came off the back of their clearance and contested work.

They had eight of the first 10 inside-50s and were dominating the clearances (7-4) and contested possessions (19-12), before the Swans stemmed the bleeding.

Tom Mitchell (12 disposals), Jack Scrimshaw (11) and Jai Newcombe (10) looked like they were on target for 40-plus touches at the first change. But the Swans took momentum after quarter-time.

Hawthorn coach Sam Mitchell, a premiership teammate of Franklin’s, joked the champion forward did the Hawks no favour in returning on Anzac Day.

And he proved a threat for the Hawks, albeit an inaccurate threat, spraying 1.4 from seven kicks in the first half.

But the Swans looked more dangerous when they simply went to the forward in the best position.

Franklin had a terrific score involvement just before three-quarter-time when he centred a ball on his left foot to Ben Ronke, who goaled after the siren to cut the margin to nine points.

He’s made a name for himself as a goal sneak, but Dylan Moore gave Hawks fans a highlight with a flying mark just before half-time. 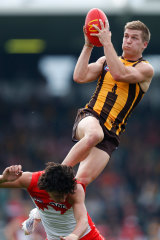 The hanger was one of the final highlights for the Hawks, who were totally obliterated in the second half.