Manly owner Scott Penn declared Des Hasler will be at the club “as long as he wants to be” as a players only meeting was held on Sunday to clear the air around the club’s rainbow jersey saga.

The Sun Herald revealed that under the terms of Hasler’s two-year deal, Manly require a top eight finish this season to trigger an automatic extension for 2024.

Sources with knowledge of the situation have indicated those terms have been revisited in talks between Manly management and Hasler’s agent George Mimis recently. Discussions took place before the drama around Manly’s ‘Everyone in League’ jersey saw seven players stand themselves down from NRL duties on religious and cultural grounds.

The Sea Eagles’ subsequent loss to the Roosters has them in danger of finishing the weekend placed 11th on the ladder, and in desperate need of a win over Parramatta on Friday.

Manly’s playing group assembled at their Brookvale base on Sunday morning for a “clear the air session” according to Penn. Josh Aloiai, Jason Saab, Josh Schuster, Tolu Koula, Haumole Olakau’atu, Tof Sipley and Christian Tuipulotu have made themselves available for NRL selection this week. 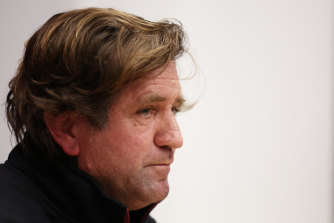 Des Hasler will be staying at the club, according to chairman Scott Penn.Credit:Getty

Penn insisted on Sunday that Hasler is under no pressure to keep his position, though declined to comment on specific performance clauses in his contract.

“I’m not going to go into detail but we’ve always said that Des is here as long as he wants to be and as long as the team’s performing,” Penn told The Herald.

“He’s not in any danger and we’re competing to make the finals.

“If we were competing for the wooden spoon it would be a different story but we’re tenth and we’ve got to win at least four, if not five out of our last five games and that’s what we’re focused on right now.

“We won’t entertain any discussions with Des until the off-season and he’s on contract for 2023 as it is.”