Gus vs the Godfather: Have Gould and V’landys really fallen out?

So this is going well.

The NRL’s crackdown on head high tackles is cracking rugby league straight down the middle. Like it needs any help. 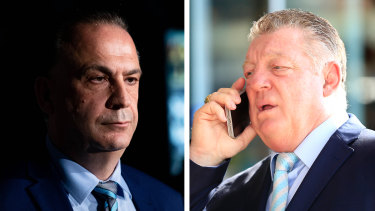 V’landys’ wheels were spinning when I spoke to him earlier this week about rugby league, life and his supposed fallout with Gould.

“I rung him and he was fine,” V’landys said. “I said, ‘Have I done something wrong?’ He said, ‘No’. Gus and I had a robust debate before we went on air [for their interview]. It was robust and heated. We both appreciated that it wasn’t anything personal. My view hasn’t changed of Gus and I hope he feels the same way.”

Of course, the truth in rugby league is a very fluid commodity. You’ll give yourself an ice cream headache trying to separate fact from fiction.

You might recall V’landys wanted to parachute Gould into League Central last year to fix the apparent crisis around referees, which V’landys identified as his No.1 priority when he became chairman.

“That’s one area that I would expect him to do a complete review,” V’landys told this column at the time. “Just to see how we can improve it. It’s always good to get a fresh set of eyes on an operation. And that is a problem area within our organisation.”

V’landys backed away from those remarks as the day went on. Many suspect it was because of the heat he was feeling from his allies at News Corp, which has been at war with Gould since the Super League days.

By the time I was sitting on a panel with Gould at Nine’s studios later that night, the idea of “fixing the referees” was completely off the table.

“He’s telling you fibs,” Gould said on-air when told of V’landys’ remarks earlier in the day.

He said he was only interested in fixing the game’s broken pathway system. Gould wasn’t hired by the NRL, instead joining the Warriors as a consultant.

In two meetings since then, in the offices of Racing NSW, V’landys has insisted Gould was coming on board as a consultant to overhaul the referees.

Only those two men know the truth but imagine the robust debate if Gould had been appointed to the NRL job which may or may not have existed.

It doesn’t matter how many different ways V’landys and others at the NRL want to spin it, this crackdown is turning into a disaster.

The scaremongering and alarmist rhetoric the past week or so really have been something to behold. Instead of having a calm discussion about the importance of limiting concussions, it’s degenerated into a barroom fight to prove who is right or wrong.

We’ve all got different opinions, but I can’t recall a time when people have felt so disillusioned about the game; from blow-out scorelines to this current edict that has fans on edge about whether the outcome of the match will be influenced by the referee or the bunker.

Then there are the players.

Some I’ve spoken to are growing tired of V’landys dismissing their concerns by simply saying “tackle lower”. We wonder how suspended Roosters enforcer Victor Radley feels about being lectured on his tackle technique, as V’landys did in an interview with Nine’s Danny Weidler on Monday.

Perhaps the answer is to ask ball-carriers like Broncos monster Tevita Pangai jnr to run less aggressively, then defenders like Radley won’t have to tackle so aggressively.

There you go. Problem solved. Let’s go to the pub.

V’landys also raised fears with Weidler about the government “shutting us down” if the NRL didn’t properly address the concussion conundrum.

V’landys was referring to an ongoing and yet-to-be-completed parliamentary inquiry in the UK into concussion in sport. That’s some leap: from UK select committee to fears the Australian government will shut down a major football code.

In typical V’landys style, you are either with or against him. There is no nuance, no shades of grey, no reasoned debate. Just spin, spin, spin.

If you don’t agree with the extreme nature of the crackdown, you are accused of not caring about “player welfare”.

He says “the haters” – the social media trolls, the anonymous emailers – have been laying into him all week.

We’re not all trolls. We’re not all fools. We know the difference between a coathanger and incidental contact with the head in a collision sport played by increasingly fit players at increasing speed with increasing fatigue.

What none of us can claim to be is the greatest player of all time, like Immortal Andrew Johns, who says he walked out of the SCG last Saturday night before full-time in the Roosters-Broncos debacle.

I asked V’landys to specifically respond to Johns’ remarks.

“I ask, ‘What’s the alternative?’” he said. “For our enjoyment, are we going to let players have lifelong injuries because some people like watching people get hit in the head? I can’t do that.”

Enjoy watching people get hit in the head?

Tell me where someone, let alone Johns, has ever claimed that.

Jack de Belin was on his way to a Rebel Sport on the South Coast to buy a pair of football boots when his legal team phoned with the news that sexual assault charges against him had been dropped. 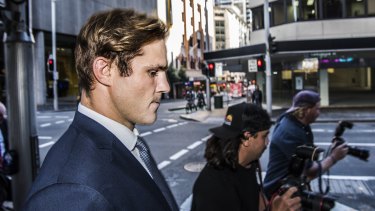 Normally, a full-time professional footballer has sponsors throwing truckloads of apparel his way. During de Belin’s two-and-a-half year battle to clear his name, they’ve deserted him.

The 30-year-old will need those boots when he makes his expected return to the field for the Dragons in their NSW Cup match against Wests at Lidcombe Oval.

When his manager, Steve Gillis, phoned him yesterday to confirm the news, de Belin solemnly said: “It’s over”.

Since that night in December 2018, when de Belin and co-accused Callan Sinclair were accused of sexually assaulting a 19-year-old woman after a Santa pub crawl, he’s been through a lot.

“He’s not doing a lap of honour,” Gillis said. “This has been a horrific ordeal for him. Before people cast their opinion, I’d caution them to know what they’re talking about before they rattle off at the mouth. If you weren’t in the courtroom for both trials, or haven’t read the transcripts, and only read or heard snippets, it means you don’t know what’s really happened. The fact the case has been dismissed is because those who did hear all the facts were unable to find him guilty.”

Gillis was having a reflective beer on his own when contacted. He said de Belin would not be joining him.

The quote
“They told him he’s in jail, no inmate gets Foxtel.” — A prison source reveals to News Corp that some of Jarryd Hayne’s requests from his cell in Parklea Correctional Centre have been denied.

Thumbs up
At the age of 50 years, 11 months and seven days, Phil Mickelson became the oldest champion in major history when he claimed the US PGA Championship. The 18th fairway at Kiawah’s Ocean Course resembled a moshpit — remember those? — as Mickelson made his way towards the green.

Thumbs down
It’s all fun and games until our Super Rugby teams have to play the Kiwis. Australian teams are zip-and-10 against their trans-Tasman rivals. This weekend, the Waratahs are $26 prospects against the $1.01 Crusaders. Winx was better value.

It’s a big weekend for …
New York Knicks super-fan Spike Lee, the who has been completely losing his rag in his team’s eastern conference match-up against the Hawks. Game three moves to Atlanta on Saturday morning (AEST).

It’s an even bigger weekend for …
Lance “Buddy” Franklin, who is in fine fettle at the moment, so much so that everyone is excited about him reaching 1000 goals — maybe next year. Swans host Carlton at the SCG on Sunday.