Penrith will forever sit alongside the greatest rugby league team in history, drawing level with the 1956-59 St George Dragons for the most wins throughout a 60-game stretch.

The Herald can reveal Penrith’s win over the Gold Coast Titans last week saw them rack up 53 wins in their past 60 games – a feat only ever accomplished by the likes of Reg Gasnier and Norm Provan during the Dragons’ 11-year reign as champions. 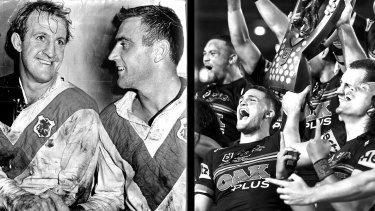 The Panthers have emulated the feats of the great St George Dragons of the 1950s and 60s, which featured the likes of Johnny Raper and Reg Gasnier (left)Credit:Fairfax/Getty

It’s been 63 years since a team went through 60 games and only managed six losses. The Panthers now sit above some of the most iconic teams in the sport, surpassing the dominance experienced by the Rabbitohs teams of the 1920s and the 1930s Roosters.

Coach Ivan Cleary has also led his team to a better record than Bob Fulton’s Manly team of the mid-1990s, who played in three consecutive grand finals.

Like the Dragons throughout their five-year period of dominance in relatively shorter seasons between 1956 and 1960, the Panthers have also lost six games and drawn one match in that period.

What’s more impressive is the fact that the Panthers had a State of Origin period to deal with, suffering two of their six losses without half a dozen of their best players last year – including Nathan Cleary, Jarome Luai and Isaah Yeo.

“The main part of our success – although there were some great players in that St George side – was that we were a lot fitter than the other sides,” former Dragons player and rugby league Hall of Famer Johnny King said.

“That had a lot to do with it. It’s a bit like looking at Penrith now. They never seem to knock off. That’s why Penrith are so good. They’re a young, fit side who back one another up. That’s the secret to the game – wearing down your opposition.

“You can see it with Penrith after 20 minutes, the other team starts walking but Penrith are always on the move. They also have a dummy half who runs out and gets their forwards on the move. We had that too.” 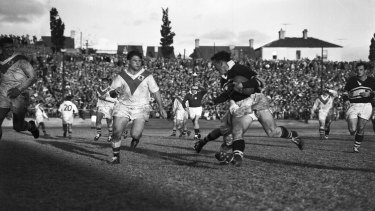 Harry Bath moves in to make a tackle for the Dragons during a match against Western Suburbs at Henson Park during their reign of dominance in 1959.Credit:Fairfax

Throughout the 60-game reign of dominance, the Panthers have won their games by an average scoreline of 27-12.

“I don’t really know what to say,” Ivan Cleary said when told of his team’s record.

“Honestly this is going to sound boring but it is literally one game at a time. I didn’t know anything about that record. It’s one step at a time and to the boys’ credit that’s how they approach it too.

“That’s the only way you can be consistent – focusing day in and day out. I think the boys are doing a pretty good job of that.”

The Melbourne Storm are widely regarded as the best team of the modern era, but even they throughout their two decades of dominance have never managed a streak as successful as Penrith have in recent years. 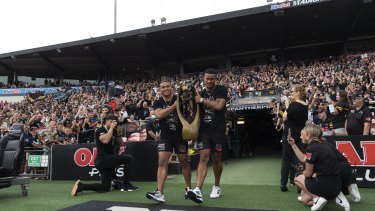 The most wins Melbourne has managed in a 60-game period is 50 victories for 10 losses. However that streak came between 2006 and 2009 when they were stripped of two premierships and three minor premierships for systematically rorting the salary cap.

If the Panthers manage to win their next 10 games they will hold the record for most wins over 70 games which is held by the Dragons with 62 victories, seven losses and a draw.

“In my time, the Roosters and the Storm were the dominant team throughout that decade,” former Queensland and Australian playmaker Johnathan Thurston said ahead of the Panthers’ Friday night clash against Parramatta at BlueBet Stadium in Penrith.

“Now you’re seeing the rise of another powerhouse in the Penrith Panthers. They are reaping the benefits of investing in their young talent and they have that in abundance. 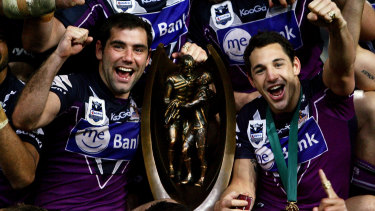 Cameron Smith and Billy Slater celebrate the 2009 grand final victory over Parramatta, which was later stripped from the club for salary cap breaches.Credit:Getty

“They have arguably the world’s best player playing halfback. I’m just in awe when I get to sit back and watch that kid go to work. Nathan Cleary’s kicking game, his pass selection, it’s just a joy to watch. No doubt this team is a powerhouse and one of the most dominant sides in the NRL era.”