From the Archives, 2014: Gray sparks a Port shock over the Dockers

Both sides will contest preliminary finals next week, having finished the home-and-away season outside the top four. It had happened only twice in 14 years before this one. 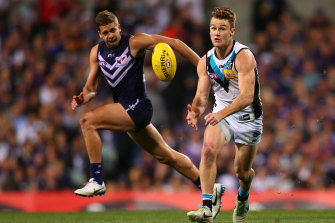 Robbie Gray of the Power handballs against Stephen Hill of the Dockers.Credit:Getty Images

The Power set up its preliminary final against Hawthorn at the MCG next Saturday with a 22-point win over Fremantle at Patersons Stadium on Saturday night.

That’s a feat in itself. Port had lost its previous five games against Fremantle in Perth, dating back to 2008 and the Dockers had lost only twice there in the past two seasons and only six times in three seasons under Ross Lyon.

The third term is dubbed the premiership quarter – and that’s when Port Adelaide turned on the switch.

The spark came from Robbie Gray, who kicked four goals in that third term, the first just 30 seconds after the restart.

The Power had been smashed in every aspect of the game before half-time so the quick start after the break was crucial. 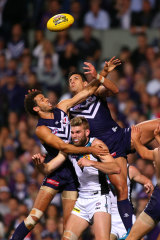 Matthew Pavlich of the Dockers crashes the pack in a marking contest.Credit:Getty Images

It was a completely different game after half-time, so whatever coach Ken Hinkley said to the Port boys at the break should be bottled.

Port had touched the ball just 150 times in the opening half, but had 92 in the third term.

It had eight scoring shots from 22 inside 50s before half-time but kicked 6.4 from 15 entries in the third term.

What would have disappointed Freo coach Ross Lyon the most was that four of those goals came from free kicks.

Fremantle had led by 31 points late in the second term, but a goal from Chad Wingard with just 40 seconds to go took the margin back to 24 and would prove important.

Wingard had also kicked a goal at the same stage of the first term.

When he kicked his third goal 20 minutes into the third term, the margin was just four points and the game’s momentum had clearly swung.

Gray, who had collected most of his 13 first-half possessions in midfield or in defence, had three touches in the first five minutes after the main break and kicked two goals – he dropped a chest mark 15 metres out that would certainly have made it three.

But his third goal came at the 25 minute mark, to give Port the lead for the first time since early in the game. 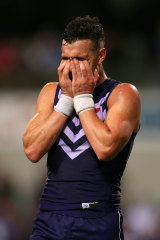 Ryan Crowley of the Dockers looks on dejected after losing the semi final.Credit:Getty Images

At the start of the final term and with their season on the line, the Dockers kicked again, with Michael Walters the target.

His three consecutive behinds in the second quarter would turn out to be important.

But his goal in the opening minute of the last put his side back in the lead.

However, when Ollie Wines kicked two goals in less than three minutes straight after that, the Power had opened up an eight-point lead.

The Power had had just six days to recover from its monstering of Richmond at Adelaide Oval, so although it is the best final quarter team in the AFL, its ability to finish this game was questionable.

But the Power finished full of run – and late goals to Wingard and Jay Schulz (his first), sealed the result.

Fremantle had led by just 24 points at half-time, but should have been much further in front.

They Dockers had 47 more possessions than Port at the main break and 17 scoring shots to the visitors’ eight.

Two of Port‘s most consistent ball winners – Travis Boak and Kane Cornes – had just 10 touches between them for the half.

Boak was Ryan Crowley’s latest victim, while Cornes sacrificed his own game to follow Stephen Hill.

The problem was that while Hill usually struggles with that tag, he was part of the Dockers’ midfield brigade that started the game so well.

Lachie Neale had 20 touches in the opening half and the man that most AFL players say is the best in the business in 2014, Nat Fyfe, had 15 and two goals.

Actually, five of the Dockers’ six first-half goals came from their midfield.

And while Neale finished with 32 touches, late possessions from Boak, who had eight disposals in the final term – the same as he’d had for the previous three, were more damaging.

Fremantle captain Matthew Pavlich had one of his quietest games of the season, managing only five kicks and seven handballs. He was kept goalless, managing only three behinds.