Finally, Pies let the Cat out of the bag

IN THE end, the biggest surprise of the 2011 grand final was the margin by which it was decided. Twenty or 30 years from now, people might glance at yesterday’s final scoreline and presume this one was a bit of a yawn. And they could not be more wrong. 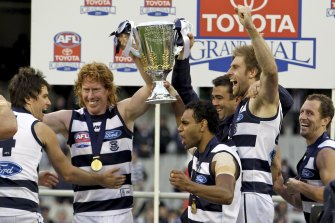 Cats players celebrate their team’s win over the Magpies in the Grand Final on the podium.Credit:Paul Rovere

For a bit over three quarters, this was one of the great grand finals. It was tough, all right, but players of both sides could also find enough room to strut their skills. And the plot was a beauty. It waxed and waned, the lead having changed 10 times before three-quarter time, neither side able to make enough of their patches of dominance to shake the other clear.

First, it was Geelong shooting out of the blocks. Then Collingwood reeling it in. Then the Magpies taking control. Cats coming back. A goal-for-goal third term. And a fitting denouement.

The Cats wore them down in the finish. But not even the greatest soothsayer could have confidently seen that coming until it actually did. Not that Geelong wasn’t doing pretty much everything right. Right from the start, too. 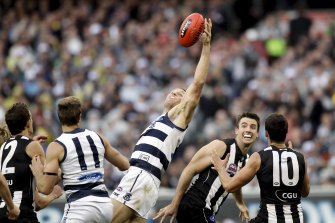 Cats ruckman Brad Ottens attempts to control a bounce at a stoppage.Credit:Paul Rovere

Has there been a quicker, cleaner and more emphatic start to a grand final than we saw yesterday? The first centre bounce was absolute clinical work by the Cats. Ruckman Brad Ottens did not win a decisive tap, but his follow-up handball to Joel Selwood, from his knees, was excellent, the onballer putting Travis Varcoe in acres of space, the little man cruising into about 45 metres and converting. That took all of 11 seconds.

After four minutes, he and Geelong had two, this time slamming through a set shot from a clever pass by Steve Johnson. The initial signs were certainly good for the Cats. Two goals to zip, their supposedly injured star bounding around looking very dangerous, the contested ball stats, a key indicator that a team has brought its hard game, running 9-2 their way. 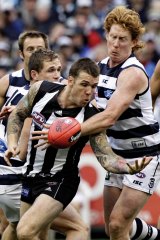 Collingwood needed a shot in the arm. It certainly got one from Travis Cloke, whose almighty roost from at least 60 metres made it home with plenty to spare. Soon, he made it a double, this time more conventionally, from another mark on 50. Andrew Krakouer added another.

Suddenly, the Pies were in front, and then soon enough, on the brink of blowing it open, leading by three goals, Geelong about the same time losing James Podsiadly.

But half the reason these two sides have been the best of the past five years is the strength of their resolve to simply hang in there until the tide turns. And Geelong simply willed it to turn. The tone was set by arguably its two most reliable performers, Selwood and Jimmy Bartel, who just banged in harder, and also banged home the last two goals of the first half, both deep into time-on, which pulled the deficit back to single figures.

Significantly, in the last 10 minutes of the quarter, the Cats beat the Pies at the stoppages 8-2. 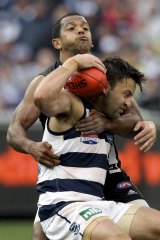 The pivotal midfield duel, though, was Cat skipper Cameron Ling’s eclipse of Brownlow medallist Dane Swan, whose 20 disposals were a pauper’s return compared with his average of 30-plus. Ling had as many himself, and kicked the last goal of the game besides. Of all the older Geelong players all but written off this time a year ago, Ling has more cause than most for a little nose-thumbing right now.

Gradually, Geelong asserted its edge, and finally, decisively, on the scoreboard. And perversely, Podsiadly’s injury might have done the Cats a favour. Lingering closer to goal, Tom Hawkins picked the perfect moment to do the coming-of-age routine, Ben Reid suddenly made to look vulnerable, Hawkins “clunking” them all over the place, booting three in the third term, and doing it again at the start of the last.

Two resultant misses when the game could have been iced might have been costly. Instead, Hawkins just plucked another grab, 15 metres out, and to be sure, dished off a handball to a grateful Johnson. That made it 15 points. Varcoe, in his most important game for the Cats, dribbled through as good as the sealer. Then, after soaking up another five or so minutes, Norm Smith medallist Bartel provided the fitting exclamation point.

Collingwood had its heroes, too, Chris Tarrant tremendously resilient in defence, Scott Pendlebury doing it as economically as ever, Dale Thomas back at his peak, Steele Sidebottom becoming important after an ordinary start.

But Geelong’s incredible evenness means all parts of any opponent’s engine need to be in working order.

Instead, the Pies coughed and spluttered a little too much, Swan down, Alan Didak failing to find the magic that has eluded him for some time, Krakouer electric early, then unsighted, just two disposals after half-time, Jarryd Blair invisible and eventually subbed off, and even the colossus Cloke brilliantly shut down by Tom Lonergan after those early salvos.

There was no shame for Collingwood. The Pies weren’t at their peak, yet have won games this year playing worse. But you don’t get away with that against the Cats. They were just that little bit tougher. That little bit more skilled under pressure. And perhaps, in the end, that little bit more desperate for a golden age to be suitably rewarded.