Lance Franklin has ignited a miraculous comeback from the Sydney Swans, who clawed their way back from five goals down to beat Richmond by six points and keep their AFL top-four hopes alive in a thriller on Friday night.

Franklin booted five goals – four of them coming in the second half as the Swans responded to a first-half clinic from the Tigers with a brilliant finish in the club’s annual Marn Grook game.

The Swans were 33 points behind at one stage, having conceded seven unanswered goals across the first and second quarters as Richmond’s old guard including Dustin Martin, Trent Cotchin and Dion Prestia led the onslaught, with their relentless pressure far too much for a sloppy Sydney to handle.

But a long-distance screamer from Franklin brought the dormant crowd of 31,387 alive, and the Swans began to feed off their energy. Soon enough, the pendulum swung their way. They held the Tigers to just one goal in the third quarter, closing to within one straight kick at the final change.

The last quarter was an enthralling, back-and-forth affair in which the Swans managed to hold their nerve. Franklin’s fifth put them in front for the first time since the opening term, before a deafening roar overwhelmed the SCG when Sam Wicks kicked the ball into the top tier of the Don Bradman Stand from close range to put Sydney seven points ahead with less than 10 minutes to go.

Isaac Heeney then made it a 13-point lead, with the Swans able to close out a famous 16.10 (106) to 15.10 (100) win, snapping Richmond’s four-game winning streak in the process – although a late goal in the final stages from Josh Gibcus, Franklin’s direct opponent for much of the night, meant nothing was certain until the siren. 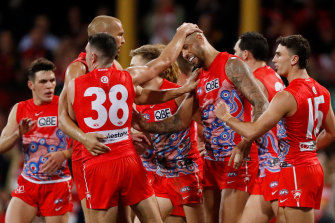 Lance Franklin and the Swans celebrate.Credit:Getty

In the context of the season, this was huge for Sydney. Had they lost, their top-eight position would have been at risk, and any ambitions grander than that seriously dampened. Their continued in-game inconsistency will, however, be driving coach John Longmire absolutely mad.

With Melbourne (away), Port Adelaide (away) and St Kilda (home) to come, there are more choppy waters ahead, but this was a result and a performance that they can build on.

Franklin was at his scintillating best, but could be in the crosshairs of the AFL’s match review officer after a clash with Cotchin in the dying stages of the second quarter, when the game was going against them. A frustrated Franklin appeared to strike Cotchin in the chin with an open hand as they argued off the ball and was pinged for a free kick, which could be followed by a suspension if the contact made is deemed to be forceful enough. 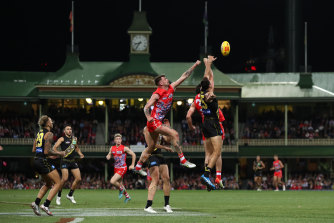 Sydney were missing several key players, including injured ruckman Tom Hickey (toe), Josh Kennedy (hamstring) and young gun Nick Blakey (flu), who was a late withdrawal. Blakey’s drive across half-back has become pivotal for the Swans and so it was no surprise that they were much less fluent with the ball between the arcs without him, their sloppy ball use playing right into Richmond’s hands.

When they belatedly found their composure, it was no surprise that things began to click into place for Sydney.

Coming into this match, there was no splitting the two teams. Both Sydney and Richmond had a 6-4 record with a percentage of 120.4, although the former was coming off two months of patchy performances, and the latter a run of wins that had bounced them quickly up the ladder.