Fox wants own commentators for all AFL games, not Seven’s

Foxtel is seeking to use its own commentary team for all nine AFL games per round, rather than having to use Seven’s live call of the free-to-air games.

Industry sources said Foxtel, which is trying to retain the broadcast rights for the AFL beyond 2024, wants to replace Seven’s commentators with the callers and special comments team from Fox Footy.

And, in another key bid by the pay broadcaster of the AFL, Foxtel also is seeking to have a “Super Saturday” in which it has the rights to the whole of Saturday in the home-and-away rounds, without any games broadcast via free to air on that day. 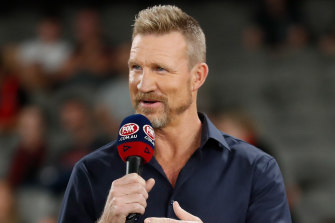 If Fox Footy was able to get its own team installed for those free-to-air slots, it would mean that callers such as Anthony Hudson and special comments people such as Nathan Buckley, David King and Nick Riewoldt, would replace Seven’s predominant Friday night crew of Brian Taylor, James Brayshaw and Daisy Pearce, in the Fox Footy broadcast.

Seven mainly uses Hamish McLachlan, Luke Darcy and Wayne Carey on Saturday nights for its broadcasts. Also part of Seven’s commentary team are Jason Bennett and former ABC caller Alister Nicholson and the network uses a combination of its team on Sundays. They have been on the road more often this year, rather than calling games outside Victoria remotely.

Foxtel broadcasts every game during the season, except the grand final.

Should the AFL agree to a new deal in which Fox Footy/Foxtel would have its own call of the game, it would replicate the system in the NRL, in which Fox League (Foxtel’s NRL channel) uses its own commentary and graphics, rather than that of Channel Nine, which broadcasts on Thursday and Friday nights and one Sunday afternoon slot, with Foxtel having the other five NRL matches.

A Fox Footy call of all nine AFL games would be in line, too, with the pay/streaming operator’s Australian Test cricket broadcasts over summer, which have separate commentary teams from Seven.

Under the current arrangements, which run until 2024, Seven has Friday and Saturday nights on free to air, plus 3.20pm games on Sundays with Foxtel (broadcasting as Fox Sports and on Kayo) owning the rights to the other time slots. Seven also broadcasts special event games such as Anzac Day’s Collingwood and Essendon matches, Easter Monday, Good Friday eve, Anzac Day eve and the Queen’s Birthday.

There have been 18 AFL games go past the million-viewer mark this season, exactly half on Friday nights, and almost a quarter on Thursday nights, in a measure of the popularity of those slots.

The Fox Footy view is that its production – which is tailored for a more rusted-on AFL fan than Seven’s broader demographic – is superior to Seven’s and is thus more attractive for its subscribers.

The current deal, worth a total of $946 million for 2023 and 2024, includes Seven providing the commentary, but if Foxtel retains the rights with Seven, as most industry observers think most likely, the pay operator could install its own commentators for all games before 2025.

The AFL has received pitches for the broadcast rights – a deal that underpins the finances of the 18 clubs and the game – from not only Seven and Foxtel, but also cashed-up Paramount, the owner of Network Ten, and global giant Amazon is also believed to have a case for at least one of the nine games. Paramount, which would share the rights between Ten and pay-streaming service Paramount Plus, has bid for the entire rights.

Channel Nine, the owner of this masthead, also is a potential bidder for a share of the rights.