The Demons will use the First Nations name for Melbourne and become the Narrm Football Club during the AFL’s celebration of Indigenous culture in Sir Doug Nicholls round this season.

The club will first adopt the new name against North Melbourne at Marvel Stadium in round 10, before widely using the new name and logo at its home game against Fremantle the following week. 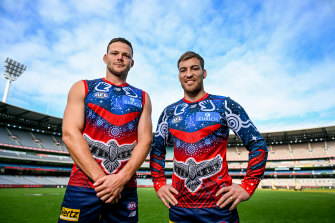 Melbourne will become the Narrm Football Club during the AFL and AFLW Indigenous-themed rounds.Credit:Joe Armao

The Demons also unveiled Indigenous guernseys designed by Wurundjeri/Dja Dja artist Ky-ya Nicholson Ward on Monday. They will be worn by the AFL and AFLW teams in their respective Indigenous rounds. The Demons’ AFLW side will also use the Narrm name during the AFLW Indigenous round later this year.

Former Demon Aaron Davey travelled down from Cairns to host the launch ceremony.

Demons defender and Indigenous man Steven May said he was proud the club had made the temporary change to recognise the traditional owners of the Melbourne area, adding it was “something I never really thought was going to happen”.

“There’ll be little kids here watching us play, asking their parents what the name means. That will start conversations and the flow-on effect from that is just huge,” May said.

“The only way we can get better with education is if we’re teaching and raising awareness, so I think this is another step along the way to fast-track that.” 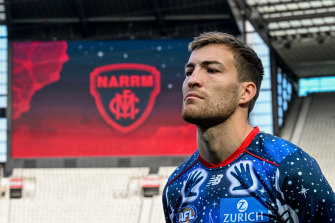 Melbourne will use the new Narrm name widely during the AFL Sir Doug Nicholls round and AFLW Indigenous round this year.Credit:Joe Armao

“Narrm” is from the Woi Wurrung language spoken by traditional owners. As this language is verbal, there are several spelling variations.

Melbourne CEO Gary Pert said the club had consulted the Wurundjeri Woi Wurrung Cultural Heritage Aboriginal Corporation to seek guidance and permission to adopt the name, including how it was spelt.

“It’s an exciting announcement by the club – something that we haven’t done before. This is all about creating awareness, creating a conversation, maybe even debate,” he said.

Pert said the initiative was a focus on the club’s Reconciliation and Action Plan committee.

“Our vision for reconciliation is, through AFL, to unite Aboriginal and Torres Strait Islander peoples with non-Indigenous people, to understand and embrace history, culture and community,” he said.

“It’s a huge honour to be able to represent my family and to hopefully inspire other young Indigenous artists as well,” she said.

The Demons remained undefeated after overcoming Hawthorn by 10 points at the MCG on Saturday evening, despite losing four players and coach Simon Goodwin to COVID-19 protocols before the match.

May said Goodwin delivered both pre-game and post-game speeches via Zoom on the weekend.

“He’s very active on the WhatsApp. It’s pretty funny – we had him on Zoom post-match in the change rooms and he had his set-up at home, so he’s in good spirits,” May said.

Demons midfielder Jack Viney said the team was not yet “firing on all cylinders,” despite winning their first seven games this year and would face tough opposition when they played the Saints at the MCG on Sunday.