Fast break: How Ramadan brought the best out of Saad

There is much about Adam Saad that is easily misunderstood.

The calmness that the devout Muslim finds from his faith belies the ballistic style in which he plays his football. He catches the eye with his attacking flair but it’s the one-on-one work which forms the cornerstone of his game. He is a man who loves the contest yet is rarely found in on-field skirmishes.

Saad is speaking to The Sunday Age on a chilly morning this week at Ikon Park. The sun is yet to break over the Gardiner Stand. His teammates are still arriving for training.

This is not an early start for Saad. Just days earlier, he celebrated the end of Ramadan. A typical day for him during the holy month started at 4.15am, in order for him to eat and drink before sunrise and ahead of the fasting period. 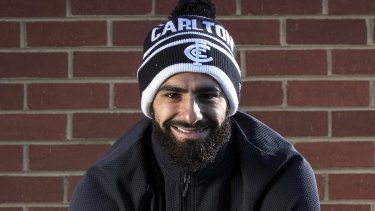 Carlton’s Adam Saad credits the holy month of Ramadan for his strong form this year.Credit:Darrian Traynor

For Saad, Ramadan, which this year began on April 2 and ended on May 1, fills him with a sense of peace and tranquillity. He feels it is when he plays his best football.

“It’s such a spiritual month, it’s a month we look forward to: a month of forgiveness, month of reflection, a month to get closer to God, worship, prayer and remembrance,” Saad said.

“We show gratitude for what we have and also for the less fortunate: those who don’t have food, or don’t have homes.

“The month’s finished now. We miss it so much when it’s gone, hopefully we’re here to see another one.”

It’s so rewarding. You do so many good deeds during the month and the year, the rewards multiply in this month. It’s hard to point out one thing. Tranquility and peace. Remembering God a lot more.

Not eating between sunrise and sunset, or drinking water during games, may not marry up with sports science and high performance but the sceptics underestimate the power of Saad’s mind and spirituality.

Despite the obvious physical challenges, his form flourished. The need to rise early sharpens his attention to detail, he said. Of the four games he played during Ramadan, Saad polled coaches’ votes in two matches.

On the exterior, Saad is a ball of muscle. Scratch beneath the surface of the man who leaves Carlton fans on the edge of their seats every time he tucks the Sherrin under his arm and explodes like a coiled spring, and you find an underlying calmness he says he derives from his faith.

“God gives us strength during this month,” Saad said. “Footy is such a hard sport. You feel at peace, you feel like God gives you that inner belief and confidence when we go out there to play and train.

“It’s so rewarding. You do so many good deeds during the month and the year, the rewards multiply in this month. It’s hard to point out one thing. Tranquility and peace. Remembering God a lot more. Trying to improve myself a lot more. That balance helps you go out and perform each week.”

The good deeds he speaks of can be as simple as a smile or a hello to a stranger.

“Whenever we can do a good deed, little or small, no good deed goes unnoticed,” Saad said.

The same can now be said for how Saad goes about his football. Some players have the mantra of “see ball, get ball”. Saad has a variation on this.

“For me, it’s always been if I see space, I always try to take the space,” Saad said.

This approach has led to perceptions he was unwilling to play lockdown roles at Essendon – one perpetuated by reports which surfaced during the 2020 exchange period and was rubbished by his manager at the time. An insider during Saad’s time in the red and black this week contested the assertion he did not want to defend.

Blues coach Michael Voss could not be more impressed by what he has seen from the dashing backman.

“He defended really strongly in is one-on-ones, and he provided really good bounce off half-back, which is what we’ve seen him do a lot of.

“But his ability to be able to intercept, whether it’s in the air, on the ground, was a really strong part of his game.”

Saad has a knack of turning danger into counterattack in a couple of bounds.

“I base my game on my contest,” Saad said. “I feel like I’ve had that through the majority of my career.

“I feel like I bring a balanced game with my contest and rebounding when I can.

“When I get the ball at full speed and see space you’re just so excited. You run, the crowd’s jumping up and down and roaring. It’s something I really enjoy doing. If you do get caught and someone is about to tackle you just kick it. The roar of the crowd and support gives us extra energy.”

These are exciting times for Saad, but he knows better than most how fleeting form can be. In his final year at Essendon, the Bombers were also 5-2 only to fall in a heap.

“We’re nowhere near the finished product,” Saad said. “We’ve got so much more improvement to go. We’re winning and learning and trying to get better and hopefully we continue this form and see where this takes us.”