‘Face up to their histories’: Dogs first but won’t be last to face abuse lawsuit, says lawyer

A civil lawsuit seeking damages against the Western Bulldogs for claims of historical sexual abuse will be the first of many against AFL clubs, according to the lawyer representing survivor Adam Kneale.

Kneale has launched Supreme Court action against the Western Bulldogs, formerly Footscray, seeking damages for abuse he endured from the age of 11 by a former member of the club’s fundraising committee, Graeme Hobbs. 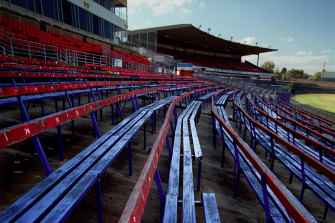 Adam Kneale is seeking damages from the Bulldogs.Credit:Neil Newitt

Michael Magazanik, a partner with Rightside Legal, said that while Kneale was the first person known to sue an AFL club over claims of childhood abuse, others would join him.

“We know that there were other victims at Footscray and there have been publicised cases of child abusers in senior positions with Little League teams in the 1970s,” Magazanki said.

“Multiple clubs will have to face up to their histories as more survivors step forward.”

Kneale told his story to police in 1993, aged 21, which led to Hobbs and another man being jailed.

“But that didn’t end his suffering and Adam has now lived with the consequences for nearly 40 years,” Magazanik said.

Among the claims were that, Hobbs – who had been recognised in the Bulldogs’ annual reports for his services to the club as a “jack of all trades” and “room steward” for the under-19 team – used the club’s facilities at Western Oval to sexually abuse a young boy for seven years, during training nights, on match days, and on an interstate football trip.

It’s also alleged Hobbs gave football tickets and cash to young boys who sat with him in the John Gent Stand on match days.

Magazanik said Kneale – who detailed his story to the ABC last month – wants other victims to know they’re not alone.

“Adam is grateful for the support he has had from family and friends and he hopes his story will give hope to other survivors and encourage them to seek help,” he said.

“Now he’s now going to focus on his family, his own mental health and his legal claim against the Western Bulldogs.”

The Bulldogs said they were not in a position to comment due to the “sensitive nature of these issues and the commencement of legal proceedings before a jury”.

When Kneale’s story was reported in April, Western Bulldogs chief executive Ameet Bains told the ABC his club was “shocked and dismayed” by Kneale’s claims.

“We have been shocked and dismayed to learn about the terrible abuse suffered by Adam Kneale in the 1980s, the confronting details of which were set out in today’s ABC article,” Bains said.

“What Adam was subjected to as a child and the impact it has subsequently had on the remainder of his life is heartbreaking and distressing.

“Football clubs should be a safe and enjoyable place for all people, especially children, so Adam’s experiences and the fact that elements of this abuse occurred at the hands of a Footscray Football Club volunteer are simply devastating.

“We applaud Adam’s courage to come forward and share the details of his story and we cannot begin to understand the trauma he and his family have been forced to deal with for more than three decades.

“While these matters were investigated by Victoria Police and relevant authorities in the early 1990s, resulting in a number of charges being laid, a criminal conviction being sustained, and a subsequent jail sentence being served by the principal offender, we understand and acknowledge that the pain continues to this day for Adam.

“We have communicated our wish to meet with Adam and his family to provide any direct support we possibly can, and to personally convey our sorrow over what he has endured.

“The club will seek advice from police and expert agencies to ensure Adam and anyone else who may come forward are appropriately supported.”