Essendon have shown they are not to be taken lightly during 2021, thrashing a shellshocked St Kilda by 75 points to record Ben Rutten’s first win as senior coach.

Jake Stringer, in his first match for the season, set up the win with four first-half goals as the Bombers kicked a dozen goals before the long break. 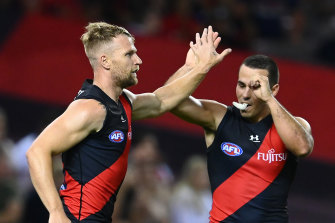 Jake Stringer is congratulated by Alec Waterman after scoring for the Bombers.Credit:Getty Images

Essendon maintained their rage in the second half, determined not to suffer the same fate as they did in round one when they squandered a 40-point lead at half-time to lose to Hawthorn by a point.

St Kilda were, in a word, pathetic, with the hard running that has defined them under Brett Ratten completely absent.

Their midfield was outworked from the first bounce when Darcy Parish and Zach Merrett combined to find Stringer inside 50.

The absence of ruckmen Paddy Ryder and Rowan Marshall was no excuse either as the Bombers were forced to use Peter Wright in the ruck after Sam Draper had joined Jye Caldwell, Dylan Shiel, Dyson Heppell and Michael Hurley on the injury list.

Wright had former Bombers Jake Carlisle and Shaun McKernan as his opponents and they were unable to have an impact as Essendon burst from stoppages too easily.

The signs the next generation of Bombers showed would have pleased their fans the most, however.

Archie Perkins showed on debut why he was so highly rated ahead of the national draft, attacking the contest like he had been playing senior football for several seasons.

Nik Cox was outstanding too, able to find time and space where little appeared to exist, regularly finding a teammate. 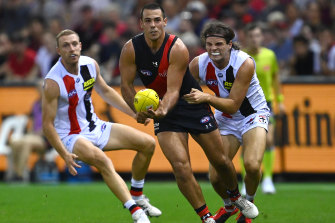 Harrison Jones, in just his third game, dragged the goalkicking monkey from his back when he converted a set shot from 40 metres in the second quarter and pre-season supplemental period addition Alec Waterman kicked a long goal in his first game with the Bombers.

St Kilda were as bad as Essendon were good, with their skill level deplorable for the second week in succession.

They conceded scores from turnovers with poor kicking out of defence and their midfield wasn’t prepared to work hard enough to find an opponent when the Bombers went forward. They also only laid just 33 tackles despite winning 116 fewer disposals. 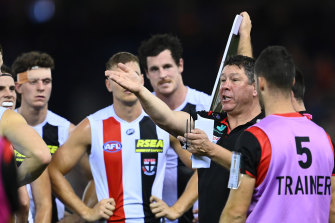 Ratten knows they have an issue with their kicking but it is not an easy fix. Several of their big-ticket recruits Brad Hill, Zak Jones and now Brad Crouch would lucky to hit a pinata at the moment.

Their capacity to lift in that area was not helped when Jade Gresham was carried from the ground with an Achilles injury midway through the second quarter.

His absence also meant gallant co-captain Jack Steele was left to fight a lone battle in the midfield with the Saints facing a tough run in the next three rounds.