Emerging from the darkness: Chiocci flying high with the Magpies

Steph Chiocci, Collingwood’s inaugural AFLW captain, has been at the helm for the side’s entire five-year lifespan.

Candid about the dark mental space she found herself in during the team’s less successful early years, she will lead them onto the Gabba this Saturday in their first preliminary final. 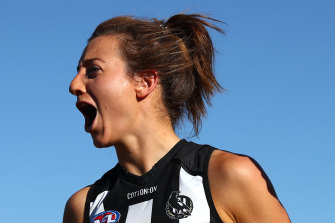 Steph Chiocci has endured difficult times at the Pies and is enjoying their current success.Credit:Getty Images

“I wasn’t shy in admitting it took a mental toll on me, it’s really tough when you’re leading a team
and you’re just not succeeding,” Chiocci said.

“I probably bore the brunt of it as I’m a very emotional person and I’m fairly critical on myself.”

In 2019, the Magpies recorded just one win, following the departure of six of their top 10 best-ranked players the previous year. Four of those players joined the Kangaroos, and kicked more goals between them for the new club than Collingwood that season.

“I could see we had young talent there that just needed an environment where they thrived,” she said.

After the initial two seasons, speculation mounted about friction between players and the previous coaching cohort, a theory seemingly endorsed by the club changing its senior coach in June 2019, with Steve Symonds appointed at that time.

“Steve came in with a completely different game style and structure which sparked something in the
girls, now we play with more freedom, we’ve found our groove,” Chiocci said.

The captain has blossomed under the simplified game plan Symonds introduced, and has enjoyed her best season. The full-time schoolteacher also attributes her improved mindset in recent years to the fact that she was able to step away from her day job, although briefly.

“I took leave without pay to focus on football, I didn’t think I was performing my best which was probably purely because I was so exhausted from juggling full-time work; I don’t know how any of us do it,” Chiocci said. 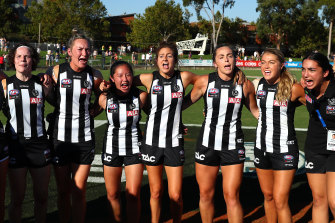 Chiocci (centre) and her teammates enjoy their finals win over North Melbourne.Credit:Getty Images

“I took term one off and would get to training excited because I wasn’t tired, I was able to bring that
energy for the girls, those are the sacrifices you have to make sometimes.

“I wanted to do it again this year but unfortunately it couldn’t happen … in an ideal world I wouldn’t be working full time I’d commit everything to football but that’s just how it is.

“I know I’m part of something pretty special, paving the way for future generations. We’ve got a clear pathway now with Auskick through to AFLW and I’m playing my role in that, the bigger picture is what drives me.”

This sacrificial leadership makes clear why she’s remained at the helm since day one. So too does her tangible passion for mentoring upcoming talent.

Magpie Tarni Brown, the 18-year-old daughter of club great Gavin Brown, bizarrely slotted a point for their semi-final rivals North Melbourne last week, but redeemed herself with the winning goal, which her skipper describes as poetic. “That was a credit to her character, she could have easily gone into her shell but she bounced back.”

Apart from the new recruits, Chiocci lovingly refers to the five “OGs” (original gangsters) who remain from Collingwood’s inaugural year. Stacey Livingstone, Brittany Bonnici, Ruby Schleicher and Sophie Casey “stuck it out with the highs and lows, so it’s nice to see it paying dividends”.

It is no mean feat considering player movement remains rampant across the expanding league.

“The past two seasons we’ve retained girls from the draft and had continuity in our list which is
really important,” she said. “The more you play together, the more you understand each other and have that synergy.”

That synergy also translates to the captaincy she now shares with former Carlton skipper Brianna Davey, who “has made a huge difference to my preparation and leadership”.

Turning their focus to the impending preliminary final, the co-captains are keeping it simple. “There’s a lot of nerves, we’ve got a very young group in terms of finals experience, but Bri and I are
good at getting around the girls and ensuring they’re switched on.

“On our board last week it said ‘fight all the way’ and credit to the girls – they show a real fighting
spirit, I’m really proud of it.”