Eels punish Panthers after Cleary sent off for spear tackle

Penrith look set to be without Nathan Cleary for the rest of the regular season after he was sent off for a sickening spear tackle on Friday night.

The Panthers trailed 30-4 at half-time against Parramatta in front of a pumped crowd at CommBank Stadium, and eventually lost 34-10.

Cleary was marched by referee Todd Smith in the 18th minute when he lifted Dylan Brown into a dangerous position.

He immediately knew he was in trouble and walked away, banging his head with his hand. Thankfully, Brown bounced back to his feet.

Andrew Johns said on the Nine commentary: “That is a really bad one. He gets him in a terrible position.”

It was the first time the No.7 had been marched in his career and Penrith’s first send-off since Travis Burns intentionally hit Martin Kennedy high in 2012, which led to a nine-match ban. 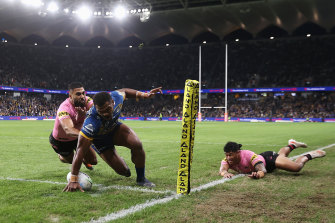 Under the NRL’s new judicial code, Cleary faces up to five weeks on the sideline should he be charged with a grade-three dangerous throw and enter an early plea. That means he would not play again until the finals.

A grade-two dangerous throw carries a three-match ban. It is Cleary’s second offence for the year, after a dangerous contact charge involving Brisbane’s Billy Walters in round six. It means he would receive a slightly higher penalty.

Parramatta versus Penrith is one of the biggest rivalries in rugby league, and the fans sprayed Cleary as he made his way up the tunnel.

The competition leaders and premiers are already without five-eighth Jarome Luai because of a knee injury. He is also not due back until the finals.

The mountain men will now rely on Sean O’Sullivan and Jaeman Salmon to get them through the next few weeks. Another playmaking option, Kurt Falls, is rated a 50-50 chance to return from an ankle injury for next Saturday’s trip to Canberra.

Penrith came into round 20 eight points clear of their rivals, but the loss of Cleary and Luai will at the very least generate renewed excitement among the title contenders in the final rounds.

Parramatta were desperate to make a statement after a soul-crushing loss at home against Brisbane last weekend.

The weight of possession and the loss of Cleary meant the Eels had a chance to win big.

Sadly, they failed to deliver the knockout blow, and had to wait until two minutes before full-time to score another try after the break.

Penrith showed tremendous resilience, but if Parramatta were a fair dinkum title contender, they would have chalked up a cricket score. Imagine if Penrith had been in a similar position against an Eels side without Mitchell Moses at half-time?

Reed Mahoney bagged a first-half double before he was given an enforced early mark because of an ankle injury. And Moses produced two 40/20s, including one that led to a Maika Sivo try. Moses sent a scare through the camp when he dislocated his finger and raced off the field at half-time for some urgent running repairs.

The Eels needed a win to kickstart their charge for a top-four spot. They travel to Manly next round to face a Sea Eagles side rocked by the rainbow-jersey drama.