St George Illawarra have asked the Wests Tigers to release Moses Mbye from his contract immediately to link with the Dragons as part of a mid-season switch.

The Sydney Morning Herald revealed in March that Mbye had been granted permission by the Tigers to negotiate with rival clubs for 2022 despite still having another year to run on his deal with the club. 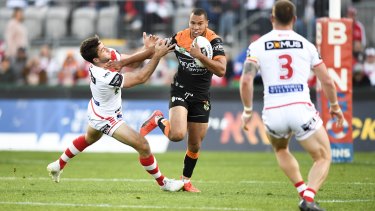 Moses Mbye is a target of the St George Illawarra Dragons.Credit:NRL Photos

Mbye recently met with the Dragons to discuss the potential of linking with the club next year. Sources with knowledge of negotiations told the Herald the Dragons want Mbye sooner than that, and any deal would hinge on the Queenslander being able to join the club in the coming weeks. The deal is likely to be off the table if Mbye can’t come now.

The Wests Tigers are happy for Mbye to look at options for next year, however the club is unlikely to be keen for him to leave mid-season, especially given their immediate success with Mbye shifting into the halves for last week’s game against the Knights.

The club now finds itself just two points outside the top eight despite winning just three of their first 10 games of the year and don’t want to hinder the club’s chances of playing finals football.

The Dragons approached Mbye a couple of weeks ago but wanted to wait until the Jack de Belin trial finished to work out how much money they would have in the salary cap to spend. Negotiations recommenced last week but hit a road block after the Tigers’ victory against Newcastle.

The Dragons wanted to sign Mbye as a utility on the bench, but also provide with additional options in the halves. Mbye is on a deal worth around $800,000 a season, with the Tigers considering chipping in up to half of his salary should he land a deal with another club next year.

In a candid interview with the Herald in March, Mbye admitted that he wasn’t providing the Tigers value for money.

“Let’s be brutally honest, I don’t think the club would be thrilled that their marquee player is being used off the bench for half an hour a week,” a forthright Mbye told the Herald seven weeks ago.

“I’m not ashamed to admit that the club is not getting value for money out of me. I have a big opinion of the club and want to be part of its success. It’s why I have no intention of leaving this year or leaving the club in a hole.

“But I know this opportunity can benefit the club as well as myself and it may work out a win-win situation for both parties. I get the opportunity to look around and find a club that wants me to play more minutes, and potentially even another year on top of my deal.”

“If it doesn’t work out elsewhere then I have no hesitations committing myself to the Tigers in 2022, but I feel it’s an avenue worth exploring. The club has been very supportive and understanding of my situation and whatever the outcome there will be no issue between me and the Wests Tigers.”

Sports news, results and expert commentary delivered straight to your inbox each day. Sign up here.