Dogs thrash Hawks and storm into the eight

The Western Bulldogs let James Sicily get under their skin, but Hawthorn could provide little more than nuisance value as last year’s grand finalist stormed into the eight with a thumping win on Friday night.

After a sluggish start, the Dogs took their game to a level the Hawks could not match, slamming on 13 unanswered goals on their way to a 42-point victory at Etihad Stadium.

The match was all but over midway through the third term though tempers frayed after Sicily cheekily grabbed Aaron Naughton’s headband, sparking a wild melee. It revived memories of yesteryear when Hawk Kevin Ablett and Essendon’s Cameron Clayton tried the same act on Carlton great Bruce Doull.

With only one win against top eight sides and hefty percentage boosters over several also-rans, the charge of flat-track bullies could be levelled against the Dogs – and it is a tag they must shake in the run home if they are to make the finals.

This was a must-win game for the Dogs, who face the Brisbane Lions, Sydney, St Kilda, Melbourne, Geelong and Fremantle in the next six weeks, but it was not until the second term when they played with the urgency to match.

They allowed the Hawks to skip 26 points clear before they lifted their intensity. Up to this point, the Dogs’ vaunted midfield was being dictated to by a Hawks unit playing with dare and confidence.

The speed at which the Hawks moved the ball, be it out of the centre or from defence, worried the Dogs, whose backs buckled.

There were better players on the field than Tom Liberatore, but he was the man who provided the spark. After just four touches to quarter-time, the midfielder lifted his intensity at the contest with 10 disposals in the second.

Such was the ferocity at which he attacked one ground ball, he put Changkuoth Jiath on his bum on his way to setting up a forward thrust that resulted in a much-needed goal. 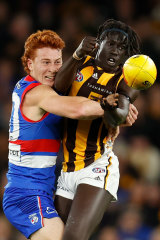 For long periods in the game, the Dogs resembled the team that made such a deep run into last year’s finals. Their contested game was powerful, allowing them to find holes in the Hawks’ defensive zone while also shielding their defence.

Josh Dunkley backed up his 27 possessions with two goals. Quiet early, Marcus Bontempelli was important when the Dogs charged.

Naughton kicked three goals, but the Dogs were not reliant on him to score, with Josh Schache and Jamarra Ugle-Hagan providing effective foils.

There were few positives for the Hawks after quarter-time, though the game should ram home to them the importance of winning contested football. The contested-ball count was in their favour by 14, but by game’s end it had flipped the Dogs’ way by 19.

Mitch Lewis was influential in the first quarter, when he kicked two of his four goals, and attacked the ball with vigour in the air. Ed Richards felt this directly, wearing a knee to the back of the head that resulted in him being taken out of the game, presumably due to concussion protocols.

SON OF A GUN

Rhylee West has taken a big step forward in his fourth year of senior football. A top-line midfielder as a junior, the son of Dogs legend Scott West is cutting his teeth as a small forward – and making a decent fist of it.

Prior to this year, West had managed no more than three games in a row, but he is benefiting from being given a consistent run at it – as his father controversially asserted last year on social media.

West booted another three goals, bettering his two against West Coast and Greater Western Sydney. Bragging rights, though, in the family still belong to his father, who kicked six in his fifth game.

The Bulldogs midfield is stacked, so West will have to wait before he gets his turn in the engine room, but his smarts inside the forward 50 and goal nous mean he can develop in the seniors instead of the VFL.

It is no coincidence the Hawks’ best period of the game came when Jai Newcombe was firing in the first quarter. Newcombe was lively early with his clean takeaways from the centre putting the Dogs’ defence under enormous pressure.

Newcombe ducked into the rooms during the first break and had little impact thereafter, like his teammates. Seven of his 19 possessions came in the first term. The Rising Star favourite for much of this year, Newcombe has lost ground to Collingwood’s Nick Daicos and faces an uphill task to regain top billing.