The Northern Territory is set to host a prime-time Friday night match, with the Melbourne v Brisbane Lions clash scheduled to be played in Alice Springs in round 12 likely to fill the prized slot.

The AFL is expected to announce the schedule for rounds 11 and 12, which encompasses the Sir Doug Nicholls round clashes, before the end of the week. 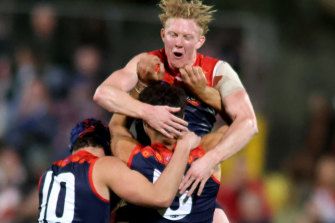 The Demons and Lions are set for a Friday night blockbuster in Alice Springs.Credit:Getty Images

Gold Coast is scheduled to play Hawthorn in Darwin in round 11 and that match could coincide with Hawks star Shaun Burgoyne’s 400th game although the veteran Hawk remains touch and go to be available against St Kilda in round seven after rolling his ankle against Adelaide on Sunday.

The game against premiership contenders Melbourne and the Lions at Traeger Park would attract a huge television audience and be a boon for football in the Northern Territory, which now hosts Melbourne and Suns home games.

The Dreamtime at the ’G match between Richmond and Essendon in round 12 will return to the MCG after being played in Darwin last season in a memorable match.