Daly Cherry-Evans has kicked Melbourne to the kerb and Manly back into the top eight before the Storm rattled up four tries in the last six minutes to threaten the unlikeliest of miracle comebacks.

The Storm arrived at the venue formerly known as Brookvale Oval having won five straight on the northern beaches since 2015, and were warm $1.25 favourites before kick-off.

But ‘Fortress 4Pines’ may yet catch on with Sea Eagles types after Cherry-Evans had a field day in the first half, kicking Manly to a sorely needed 36-30 win, the final margin softened significantly by the Storm’s late flurry of points.

Only a wayward radar off the tee from the skipper – Cherry-Evans deputising for Reuben Garrick after he copped a hip knock – kept Melbourne in it to begin with, though a penny for Des Hasler’s thoughts as another late capitulation loomed.

But Cherry-Evans was at his mercurial best throughout with two try assists, three forced drop-outs and a 40-20 just four days after leading Queensland in a miserable Origin defeat.

Had the home side gone down and results gone against them, Manly could have been four points adrift of the top eight by the end of the weekend. 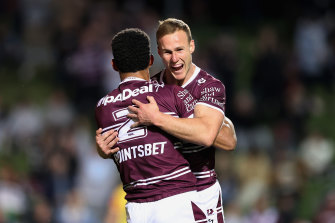 Instead, the Sea Eagles leapt the Roosters and Dragons – though both still have games in hand – into eighth spot for the first time in almost two months.

Storm fullback Ryan Papenhuyzen has been absent for a similar timeframe due to hamstring woes and an untimely bout of COVID-19 that cost him what looked a near-certain NSW Origin debut. He might have wished he’d given it one more week throughout the first half, his early try assist for Nick Meaney off-set by one for Manly’s Tolutau Koula.

After taking an errant kick from Papenhuyzen in one hand, the Tongan teen then put his Olympic sprinting lineage on show – both parents represented the island nations at three Games – over the next 90 metres and nine or so seconds.

Cherry-Evans then went to work. While Manly were more than accommodating for their guests with eight first-half errors, a Cherry-Evans 40-20 set the scene as Papenhuyzen was caught out of position. 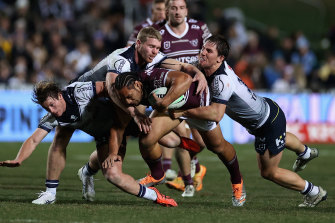 Garrick piloted Jason Saab over for one try, while the Manly No.7 was at it again the very next set. Cherry-Evans’ torpedo bomb had shades of Matt Burton about it, Papenhuyzen and Meaney in all sorts, and soon enough, Christian Tuipulotu over for a shock 14-6 lead.

Repeated raids eventually paid off moments before halftime, Saab all but falling backside first into his second try thanks to an overlap engineered by Foran.

The Storm’s second half started with a slew of errors at their own end, Manly once more finding fortune down the left edge when Morgan Harper muscled his way into the in-goal.

When Haumole Olukautu bashed and barged his way through, a pile-on loomed.

Brandon Smith stopped the rot in inimitable fashion though, ripping a one-on-one strip from Marty Taupau’s kick-off, shoving his way over afterwards for a 28-12 score line.

Cherry-Evans seemingly put any hint of a comeback to bed four minutes later by sending Koula over untouched for his second. But Nelson Asofa-Solomona, Papenhuyzen, Olam and Papenhuyzen answered with tries in a remarkable late run, only for it to prove too little, too late.

With the bye followed by a home game against the struggling Knights and fellow top-eight contenders St George Illawarra, Manly have a fair chance at bedding down that top eight spot for good over the next month.

Melbourne’s heavy defeat meanwhile gives Penrith the chance to go six points clear in first place with victory over the Roosters on Friday night, the minor premiership race potentially reduced to one with two months of football still to play.

Watch the State of Origin decider exclusively live and free on Channel 9 and 9Now.