Darcy shines but Dockers turn to Ali to flatten Bulldogs

Debutant Sam Darcy showed promising signs but the Western Bulldogs’ hopes of making the finals may have been dealt a fatal blow after Fremantle turned to a Muhammad Ali poem to help rediscover their goal power at Marvel Stadium on Saturday.

Led by four goals from key forward Rory Lobb, the Dockers, smarting after two defeats and a draw heading into this clash, rubber-stamped their return to the finals for the first time since 2015, and ensured they remained in top-four calculations. 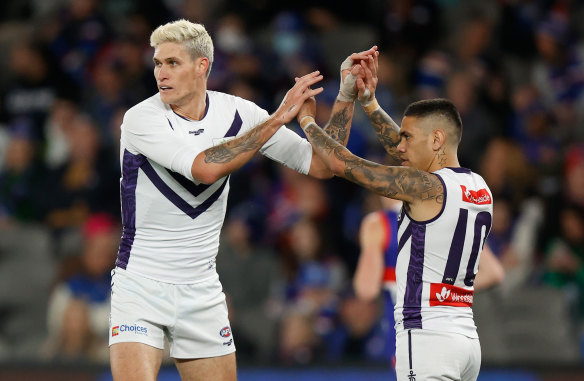 Watch the Lobb: Dockers’ forward Rory Lobb was in excellent touch on Saturday, as the Bulldogs’ finals hopes were dealt a major blow.Credit:Getty Images

In an entertaining match, the Bulldogs trailed by 23 points at the final change but could only manage two more goals, the Dockers soaking up the pressure.

“JL put a little thing up from Mohammad Ali about the Me. We. sort of thing. That was just our mindset going into this game – to think about each other because without each other, we can’t do it,” Clark told Fox Footy.

The loss is a major blow for the Bulldogs’ finals hopes, for they began the weekend a game behind eighth-placed St Kilda. With two rounds remaining, they now face the possibility of missing the finals, a year after making the grand final. There is sure to be a stinging off-season review.

The Dockers spoke pre-match about the need to use angles to hit up their forwards and that’s what they did in posting their biggest score since round 17. 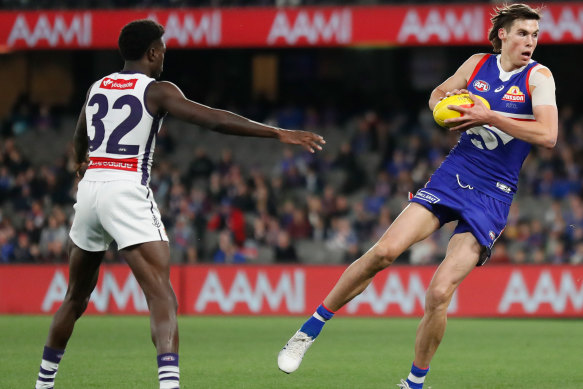 Sam Darcy in action for the Bulldogs on Saturday.Credit:AFL Photos

Darcy, the third-generation Bulldog destined for stardom, was sent into defence on Matt Taberner. At 208 centimetres – and still growing – Darcy had 10 touches and eight marks. The Bulldogs have been seeking a consistent marking tall in defence, and Darcy now shapes as the new generation talent they need.

Midfielder Caleb Serong led the Dockers’ run through the midfield and found teammates at will. Andrew Brayshaw was typically industrious, Nathan O’Driscoll provided dash, while David Mundy – despite announcing his retirement – still showed he has much to give.

“We wanted to put the Doggies under pressure with our ball movement,” Mundy said.

The Bulldogs, if they fail to make the finals, face a stinging review. Their blue-chip midfield, led by Marcus Bontempelli, Tom Liberatore and Josh Dunkley, the latter off contract, helped to win the centre clearances and overall clearances, but the Dockers too often found space.

Darcy’s first touch – an uncontested mark in defence – led to cheers from his family in the stands, and a roar from the Dogs’ faithful. But his decision to switch play had those same fans briefly concerned for his kick was almost intercepted. It all ended well with the Dogs heading into attack.

Lobb’s future with Fremantle remains unclear, and he has been linked to a trade to the Bulldogs. He reinforced how much he could help the Dogs when his first four kicks – all from at least 50 metres – split the major sticks for goals. Even Lobb appeared surprised when his third goal, from just inside the right boundary, drifted through.

The first term was all about pressure and locking the ball inside 50. When the Dogs did, they scored. When the Dockers responded with entries, they scored. But Taberner’s goal after the siren was worth a replay, for he appeared to “arc off” his line when taking a set shot. If called, this would have meant play on, and the goal disallowed.

When the Bulldogs do well, their midfield more often than not is credited with the win. But there’s one man at half-back, Ed Richards, who also deserves credit. The rebounding red-head has had an outstanding year. He lost his spot last year, but has played in 19 games this season. He had a team-high 587 metres gained on Saturday.