The high-flying Swans can boost their finals standing with a season-defining statement against the struggling Giants in Saturday’s Sydney derby at the SCG.

Swans coach John Longmire has spoken about consistency this season but has been frustrated by his team failing to string more than three wins together. 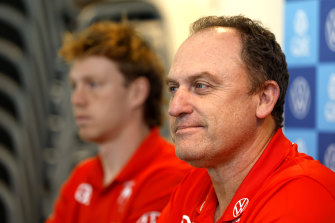 “We’re still striving for it,” Longmire said. “It was the second time we’ve won three games in a row (this year), we’d like to be able to play a consistent game again this week.”

“There’s nothing better than a rocking SCG against the crosstown rivals and we’re really looking forward to that, it’s exciting,” he said. 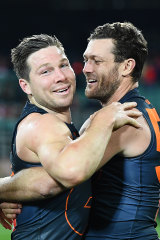 “We’re starting to put the pieces together in terms of what makes us a successful side.

“Putting pressure on the ball, we think, is a massive part of anyone’s game and when we do that, or any team does that, it gives them a good chance to win.”

The Swans can make it four straight wins on Saturday to set themselves up for a top-four finish, which guarantees a double chance.

They have four home and away matches remaining. After the Giants they meet lowly North Melbourne, Collingwood at the SCG, and St Kilda, with the Magpies the only team in the top eight.

On ladder positions, the sixth-placed Swans should easily account for the injury-hit Giants, who are 15th, but Longmire’s men are not always comfortable favourites. 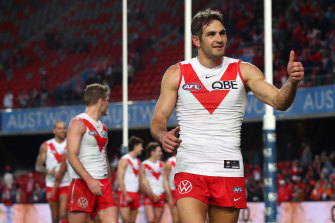 Sydney veteran Josh Kennedy is battling to get back in the team.Credit:Getty Images

Highly fancied against the Giants in last year’s finals, the Swans were tipped out in the first week, losing by a point.

The past four derby clashes have all been tight. The Swans came from behind to beat the Giants in the opening game this season, with a four-goals-to-one last quarter.

The Swans won’t know until Thursday whether they have a frontline ruckman to start the match after Tom Hickey injured his ankle during Saturday’s victory over Adelaide.

While relatively injury free this season compared to the Giants, the Swans have struggled to get both Hickey and Peter Ladhams playing together as a ruck duo. Ladhams is recovering from thumb surgery.

The Swans have the luxury of having former captain and triple club champion Josh Kennedy waiting in the wings.

Kennedy, 34, has played two strong matches in the reserves after missing eight weeks due to a hamstring injury but, on current form, it’s difficult to see how the Swans squeeze him into the side.

“Whether he comes in this week, we’re not sure. We’ll go through that tomorrow (Thursday). He’s feeling good with his body, he’s in good form and that’s a good spot to be,” Longmire said.

“We’re still confident he’s got a role. He gives us flexibility to do that. We’re confident in the back half of the year that he can be really helpful for us.”