Collingwood turned a 16-point deficit shortly before three-quarter-time into a 16-point lead of their own before holding off the fast-finishing Crows’ ferocious charge for the go-ahead goal as the frenetic final quarter drew to its dramatic conclusion.

Veteran Steele Sidebottom’s smother in the middle of Adelaide Oval with five seconds left to deny Harry Schoenberg a long entry epitomised the Magpies’ sheer will and determination. 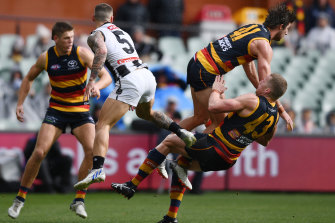 The victory improved Collingwood’s record to 7-1 in games decided by two goals or less this season.

In mint form and regarded as fine practitioners in the wet, the Magpies conceded the first three goals in driving rain before turning the tables with the next four majors to take the lead at quarter-time.

Taylor Walker booted his second goal in the opening minutes of the term, Darcy Fogarty conjured a marvellous left-foot snap, Riley Thilthorpe converted out the back of a contest and Shane McAdam marked and goaled in time-on and the Crows held the upper hand at half-time.

Their cushion stretched to 16 points when Mitch Hinge benefited from a 50 m penalty against Darcy Cameron before the Pies rallied in the shadows of three-quarter-time. 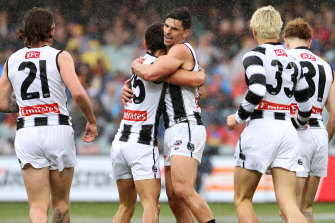 Carmichael’s excellent finish was followed quickly by Pendlebury’s typically classy goal on the run from 50m as Adelaide’s lead was trimmed to three points at the final change.

A give-and-go between Daicos and Pendlebury gave Collingwood the lead and the momentum which became seemingly insurmountable until Taylor Walker slotted his fourth and fifth goals to leave the contest – one of the best of 2022 – in the balance until the final siren.

Eagle-eyed observers with a penchant for stats and history were eagerly watching the in-close defensive hustling of Crows pair Sam Berry and Rory Laird.

Berry (12 first-half tackles) and Laird (11) were on all-time pace at the main interval, well on the path to surpassing the record of 19 held jointly by Tom Liberatore, Jack Ziebell and Jude Bolton.

For context, St Kilda had 13 as a team at half-time in their disappointing loss to the Western Bulldogs on Friday night.

Laird ultimately broke the record with his groundbreaking 20th tackle.

It would be unkind to suggest Pendlebury wound back the clock with his masterful performance in his milestone 350th game.

The six-time All-Australian, five-time Copeland Trophy winner and 2010 Norm Smith Medallist was in the thick of the action from the opening bounce on Saturday afternoon, accruing the first centre clearance, laying an important early tackle and setting up Collingwood’s opening goal with a slick handball to Nick Daicos.

Pendlebury, 34, and Daicos, 19, were the only Magpies to flourish during the Crows’ initial ambush and were brilliant all afternoon. 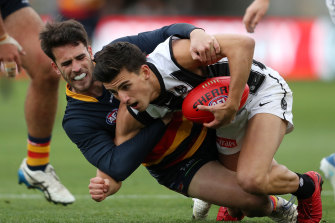 On the other end of the experience scale, debutant Ash Johnson, the older brother of Adelaide forward Shane McAdam, should have registered a goal with his first kick in AFL ranks, only to miss a relative sitter of a soccered effort from close range.

Later in the first quarter, the 2021 mid-season draftee from the northern WA town of Halls Creek beat Tom Doedee in a goalsquare one-on-one, dragged the pill away from Jordan Dawson and slotted the six-pointer with his second kick before being mobbed by his teammates.