It’s seen as the most significant meeting in trying to find a breakthrough in the delicate talks, which have stalled recently as the NRL tries to find common ground with frustrated clubs and players who have no clarity around the salary cap for 2023.

NRL club bosses held an online hook-up last night to further discuss their next move, growing increasingly agitated in an inability finalise rosters and waiting for more detail about funding for the women’s competition. Four new clubs will join an expanded 10-team competition next year.

But Abdo insisted the NRL’s current offer already tailored for a $5 million margin to clubs above the projected salary cap and the chasm between the parties wasn’t as wide as speculated.

“Our current offer to the clubs is already more than $5 million above the salary cap,” Abdo said. “I don’t know when the deal will be done, but it’s a significant priority and we will put as much time and energy into it to get a resolution as required. It’s easy to do a deal quickly and that’s to give everyone what they want, but there’s only so much available. 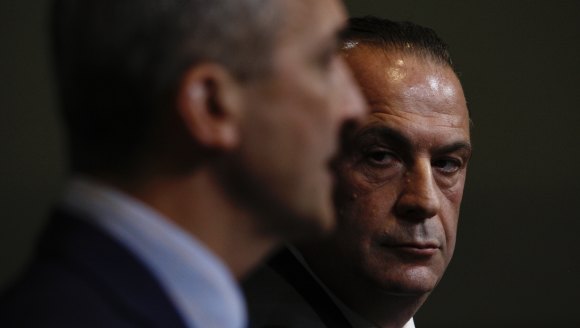 “We have to balance it and that’s why it’s taking a bit longer than everyone will like. We’ve been working professionally and in good faith with all stakeholders to get the best possible deal we can for the game. We’ve provided a lot of information, including information about our revenue forecasts and information about the proposed distribution to different parts of the game.

“There’s been robust debate and several elements of refinement to the model and proposals over the course of the past couple of weeks – and we’ll continue doing that. And hopefully we’re able to conclude this with an offer the Commission will make to all stakeholders and everyone can have the certainty to plan for their business.”

NRL club chief executives spoken to by the Herald yesterday insisted they were united with the players’ union and were willing to wait as long as possible to secure a deal they were comfortable with.

“The clubs and players have never been more united on this and this will keep going into next year unless we have a suitable offer,” one club chief executive said.

Complicating matters is the fact Rugby League Players Association boss Clint Newton has flown to the UK for the World Cup. Abdo and ARLC chairman Peter V’landys cancelled a trip for the semi-finals and final to expedite CBA talks.

Abdo is likely to deal with the fallout from clubs still questioning the AFL’s $4.5 billion TV deal – seemingly leaving the NRL in the shade – as they seek further information into the NRL’s extension with pay TV giant Foxtel, which has not publicly been disclosed.

The ARLC and V’landys are also dealing with a motion to sack four directors of the NSW Rugby League that was voted down during at an extraordinary general meeting of the NSWRL last Friday.

The ARLC has been at loggerheads with the state body since early this year after Cronulla chief executive Dino Mezzatesta was ruled ineligible to run for the NSWRL board due to a conflict of interest.

Former Canterbury and NSWRL chairman George Peponis and Roosters supremo Nick Politis quit the NSWRL board over the decision and the ARLC failed in a court challenge to have the state body run fresh elections, which V’landys championed on behalf of the clubs.

However, a motion, tabled by Cronulla and Canterbury delegates, on Friday to remove NSWRL directors Geoff Gerard and Kevin Greene was voted down.

While most of the spotlight has been on funding models for clubs and players, the RLPA has also taken a swipe at the NRL’s integrity model in a document that paints several areas as key to the CBA talks.